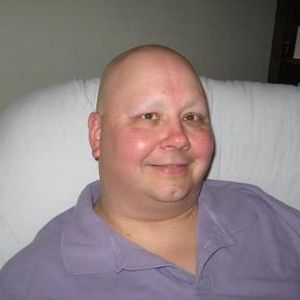 Worcester – Roger J. Moulin died Tuesday, Nov. 13, 2012 at UMass Medical Center after a valiant battle with cancer. He was 48.

Born May 25, 1964 in Worcester, he was the son of Linda (Latour) Johnson and Marcus Moulin, who died in July. Roger graduated from Auburn High School in 1982 and later earned his Bachelor's Degree from Assumption College. He proposed to Kirsten M. Kamyck at their much-loved spot, Nubble Lighthouse in Cape Neddick, Maine and they married on October 7, 1995 in Millbury Baptist Church. Together they lived in Worcester raising their two daughters, Phoebe Regina (11) and Molly Rose (7). Roger loved his three girls more than life itself. He fought his hardest to live each day to its fullest in order to create lasting memories for his daughters.

Roger worked in the Accounting field beginning at TJX Corp., later NMT Medical in Boston, and Paid, Inc. in Westborough. Roger enjoyed the company of family and good friends. He was a giver, and many people are the recipients of his generosity. No one ever left the Moulin house hungry! An avid and loyal New England Patriots fan, Roger will be remembered for manning the grill and for his annual Super Bowl parties. His faith and church family were important to him; he was an active member of St. Luke's Episcopal Church, serving on the Vestry and as Chairman of the Stewardship Committee.

In addition to his wife, daughters, and mother, Roger is survived by his sisters Laura (Joseph) Richards of Auburn and Lisa (William) Roy of Trenton, ME. He is also survived by his in-laws, Regina and Henry Kamyck and Stephanie Kamyck of Worcester; his stepmother Ellen Moulin; stepbrother Leif (Melissa) Hockstad; and nieces and nephews Samantha, Joshua, Anthony, Randall, Heather, and Shane.

Family and friends will honor and remember Roger's life by gathering for calling hours Monday, Nov. 19, from 5 to 8 p.m., at Heald and Chiampa Funeral Directors – The Sumner House, 5 Church Rd., On the Common, Shrewsbury Center. A Requiem Eucharist will be held Tuesday, Nov. 20, at 10 a.m., at St. Luke's Episcopal Church, 921 Pleasant St., Worcester.

The family would like to extend special thanks to Dr. Vijay Kasturi, Tina Henry, Mickey Balcunas and the staff at UMass for the exceptional care offered to Roger and his family during this difficult time.