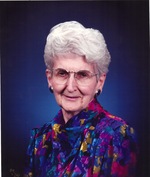 Westborough – Collette B. Gmitter, 92, of Westborough, died peacefully Friday, Dec. 28, 2012 at the Notre Dame Long Term Care Center in Worcester, surrounded by her loving family. She was the wife of the late Dr. George T. Gmitter.

Born in Chicago, Illinois, she was the daughter of the late Edgar and Leda (Goudreau) Bergeron. She attended St. Thomas of Canterbury parochial and Immaculata High School, and graduated with a B.S. in Biology from Mundelein College, the present day Loyola University.

Collette began her career as a microbiology lab researcher and was later appointed Section Head of Microbiological Control at Armour Laboratories in Chicago during the 1940s and early 1950s, something extremely rare for a woman of her day.? She developed and quantitated microbiological test methods and was published in SCIENCE journal.? She married George in 1953.

While raising her two children, she was active in parish life, volunteered with several outreach organizations, and served 11 years as a Board Member of Catholic Charities of Richmond, Virginia. She also enjoyed being a member of the local garden club, playing golf and bridge, and traveling with George, and after his death, with friends and other family members. She also returned to the research field and spent five years working at the Medical College of Virginia biophysics lab prior to her retirement in 1982.

Collette made friends easily and enjoyed many lifelong friendships, some spanning as long as 80 years.

She was a communicant of St. Luke the Evangelist Church in Westborough and a former member of The Church of the Epiphany in Richmond, VA.

Collette is survived by one daughter, Christine G. Flynn and her husband, Brian, of Westborough; one son, Martin J. Gmitter of Montpelier, VA; her one beloved granddaughter, Nicole Flynn; three nieces and their spouses, Judy Gleeson (Owen) of Ridgefield, CT, Debbie Bloch (Rodger) of Wheaton, Illinois, and Stephanie Schultz (Robert) of St. Louis, MO; one nephew and his wife, Mark Mecker (Carol) of St. Louis, MO; and grandnieces and grandnephews.

In lieu of flowers contributions in her memory may be made to St. Jude's Children's Research Hospital or The Crudem Foundation (www.crudem.org).