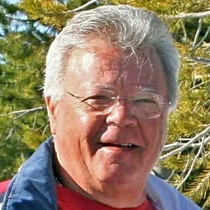 Marlborough – Ronald A. Stokes, 77, died unexpectedly Saturday, Sept. 6, 2014 after being stricken ill at home Friday. He was the husband of Jayne (Mitchell) Stokes, to whom he was married for 28 years. He was born in Marlborough, the son of the late Albert K. and Lauretta (Lapierre) Stokes Cook, and lived there all of his life.

Ron was a graduate of Marlborough High School, class of 1955, and served in the Army National Guard before going to work as a salesman for many different companies in the snow skiing industry. He owned and operated the former Country Ski Shop in Marlborough for many years.

Ron's greatest love though was his family and friends. He was a loving father, grandfather, great-grandfather, uncle, and friend, and was devoted to the love of his life Jayne. He made friends wherever he went and was often described as “larger than life.”

His funeral will be held Saturday, Sept. 13, at 10 a.m., in St. Bernadette's Church, 266 Main St., Northborough. Burial will be at a later date. Arrangements are under the direction of the William R. Short and Son Funeral Home (www.shortfuneral.com) of Marlborough.