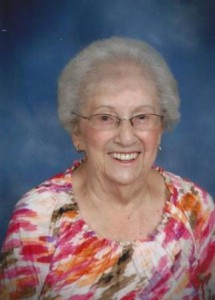 She graduated from both Assumption Grade School and Chicopee High School in Chicopee.

Evelyn began her working career as a secretary for the Commonwealth of Massachusetts Department of Labor and Industries. She then worked for many years as the assistant to the purchasing manager at Roxbury Carpet Company in Saxonville. She completed her working career as a Secretary and Administrative Assistant in the Framingham School Department.

She married Aurele DesRosiers in 1934, and they lived in Saxonville until 1976 when Aurele passed away. They had two children, Father Ronald DesRosiers, SM, a Marist priest assigned to the Church of St. Louis, King of France in St. Paul, Minn., and Anne Marie Bouchard, residing in Harpswell, Maine with her husband Armand. Evelyn and Aurele were happily married for 42 years.

In 1991 she married Dominic DiLauro, who passed away in 2000, whereupon Evelyn moved to Peter’s Grove, Hudson, where she led a happy and active life for 14-plus years. Among her many activities, she was an active member of the Hudson Senior Center, and also served for four years as the pianist for the Marlboro Golden Age Follies. She was also an active member of the Hudson Senior Center walking club, and was the leader of the Center’s line dancing club for several years. She was a member of Christ the King Sodality. She also worked for Our Fathers Table.

Evelyn always loved line dancing, singing, and playing the piano, both for her own amusement, as well as for the entertainment of family and friends. She enjoyed her summer vacations oceanside in Harpswell, Maine, with her daughter and son-in-law, as well as the many family gatherings there, especially during the summer, as well as during the holidays.

Evelyn was an avid cook with many terrific specialties. Perhaps her signature dish was her annual “Bûche de Noël” (Yule log), always laced with a little bit of rum “to help enhance the festivities,” she would say.

She enjoyed driving her many friends to doctor’s appointments and errands throughout the area. She also volunteered for the Meals on Wheels program, delivering meals to the homebound for several years.

Evelyn enjoyed traveling, going on several bus trips with her Senior Center friends, as well as spending some time traveling in Europe with her son, Father Ron. One of her favorite trips was when she and the entire family (19 in all) boarded a Norwegian Cruise Line vessel for a week’s trip to Bermuda to celebrate her 100th birthday, as well as the 50th wedding anniversary of her daughter Anne and her husband Armand. Also celebrated were the milestone wedding anniversaries of three of her grandchildren and their spouses. Her last trip was to St. Paul in August 2013, when she and her family joined her son, Father Ron, in celebrating the 50th anniversary of his ordination to the priesthood.

She was a member of St. Michael’s parish.

Besides her son, daughter, and son-in-law, Evelyn is survived by four grandchildren and their spouses, Michele Rousseau and her spouse Paul of Hudson, N.H., Mark Bouchard and his spouse Kristine of Townsend, Sharon Wade and her spouse James of Shrewsbury, and Carolyn Smith and her spouse Charles of Charlton, N.Y.; seven great-grandchildren, Marissa Rousseau of Epping, N.H., Paul Rousseau Jr. of Hudson, N.H., Cameron and Jessica Wade of Shrewsbury, Elisha Bouchard of Townsend, and Cabot and Caitlin Smith of Charlton, N.Y.; and five step-children, Ronald DiLauro of Brewster and David DiLauro, Kenneth DiLauro, Beverly Sousa, and Maryann Bush, all of Hudson.