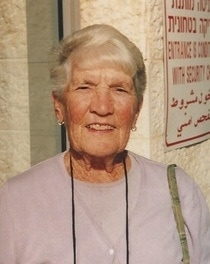 Westborough – Cecelia R. (Summers) Grynsel, 87, of Westborough, passed away peacefully Tuesday, July 28, 2015 at home. She was the wife of the late Edward C. Grynsel.

Born in Milford, she was the daughter of the late William and Mary Ellen (Van Riper) Summers. She was raised in Upton and was a graduate of St. Mary’s High School in Milford.

Cecelia taught at St. Louis Parochial School in Webster for 13 years and received her degree in teaching from Framingham State Teachers College. She also taught in the Framingham Public Schools for many years and then became a teacher of Braille for central Massachusetts for 10 years prior to her retirement.

Cecelia was a communicant of St. Luke the Evangelist Church and a 50-year member of the Westborough Country Club, where she was a 20-year club champion of 18 Hole Women’s League. She was also the winner of the Senior Golf Olympics in Cleveland, Ohio in 2013. She was an active member of the senior center and loved knitting and spending winters in Florida.

Flowers are welcomed or donations in her memory may be made to The Greater Worcester Education Fund, 370 Main St., Suite 650, Worcester, MA 01608 in memory of Cecelia Grynsel.