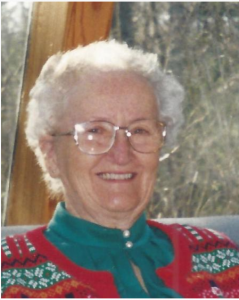 Grafton – Helen M. Bulger passed away Sept. 17, 2015. She was born in 1921 in Charlottetown, Prince Edward Island to Louis and Flora Halloran.

She was predeceased in life by her daughter, Marilyn Bulger, on July 29, 2010 and her son, Terrance Bulger, on Jan. 24, 2014. She leaves her son, Kevin Bulger, his wife Paula, and daughter Diana; her daughter-in-law, Jean; her granddaughter, Cherilyn Bulger, her partner Corinne, and their sons Logan and Beckett; and her grandson, Thomas Bulger, his wife Athena, and their daughters Gracie and Quinn. Her husband passed away in 1982.

After graduating from Concord High School in Concord, Helen graduated from Boston City Hospital and Westborough State Hospital Schools of Nursing and received her R.N. certificate. She then worked at Grafton State Hospital. While there, she was granted educational leave and received a B.A. degree in Social Rehabilitation at Assumption College in 1973.

Helen retired at age 60 and then traveled to many places while working part-time until she was 82 years old. She enjoyed traveling and her many trips included going to Bermuda, Washington, D.C., Florida, California, the New York World’s Fair in 1968, the World’s Fair in New Orleans in 1984, the Bahamas, several trips to Canada, and to Pennsylvania Dutch Country. She also traveled with Elder Hostel and the Wise Group at Assumption College to Scotland, Ireland, Wales, England, Italy, Greece, India, Israel, Russia, Portugal, Hungary, Czechoslovakia, Poland and Sicily. Her last trip was to the Grand Canyon with her daughter, Marilyn.

All are invited to calling hours for Helen Thursday, Sept. 24, from 9-10:30 a.m., at Roney Funeral Home, 152 Worcester St., North Grafton, followed by her funeral Mass at 11 a.m. at St. Mary’s Church, 17 Waterville St., North Grafton. She will then be laid to rest at St. Phillip Cemetery in Grafton.

Honor Helen with a memorial donation to the charity of your choice.