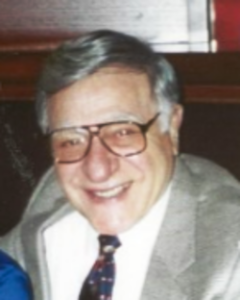 Al is survived by his devoted wife of 64 years, Norma A. (D’Ericco) Rosiello; a son, Richard A. Rosiello MD and his wife Leslie of Northbridge; a daughter, Robin L. Rosiello of New York City,; two grandsons, Ryan and Eric Rosiello; a brother, Emilio Rosiello and his wife Marge of Shrewsbury; and many nephews and nieces. He was predeceased by four brothers, Joseph, Anthony, John, and Raymond Rosiello, and three sisters, Mary Wall, Rosemary Rosiello, and Loretta Hortsman.

He was born in Worcester, son of the late Emilio and Theresa (Chivalotti) Rosiello, and lived in Shrewsbury for 62 years. He attended Commerce High School, and served his country proudly in the United States Army during the Korean War.

Upon returning from the service, Al and his brothers worked together at the Rosiello Construction Company for many years, later taking on the position of the Supervisor of Masonry for the Franchi Construction Company, where he worked until he retired. He was a member of St. Anne’s Church.

Al’s life centered around his family. He took great joy in attending his daughter’s dance performances and Holy Cross basketball and football games with his son. He and Norma attended as many of their grandsons’ sporting events as possible. They were welcomed by all the players and families as they usually arrived baring doughnuts!

Al loved spending summers with his grandchildren on Cape Cod. Higher education was extremely important to him. His most cherished moments were witnessing his children and grandsons excel and graduate from college.

At Al’s request, his family will gather to honor and remember his life Wednesday, Oct. 21 at Mercadante Funeral Home & Chapel, 370 Plantation St., Worcester. Calling hours will be from 9-10:30 a.m., with a funeral service to follow at 10:30 a.m. in the funeral home. Interment will be in Mountain View Cemetery.

To send a message of sympathy or share a special memory of Alfred, visit his memorial site at www.mercadantefuneral.com.