Central Mass snowfall will be minimal 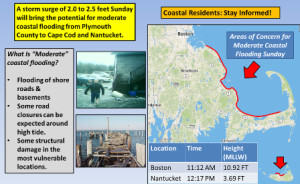 Region – Here is my latest thinking on the powerful storm that will bury the mid-Atlantic region.  This storm has a tremendous amount of energy with it and will intensify into a record breaking event around Washington D.C., where it could become an all-time top 3 storm for snow depth and there is an outside chance it could become the heaviest snowfall ever, eclipsing the 28 inch storm currently topping that list.  It will be a much different story in our region.  Heavy snow will move up the coast to Long Island and perhaps the south coast of Connecticut and Rhode Island, and perhaps reaching the outer Cape (Chatham area) and the Islands.  The heavy snow cuts off very quickly and amounts will rapidly diminish to the north.   I expect 2 to 3 inches as far north as the Mass Pike with amounts continuing to dwindle further north.  The Route 2 corridor may get less than an inch.  Two to 4 inches are likely from near the southern Massachusetts border southward and amounts will build to 4 to 6 inches in far southeastern Massachusetts including the outer Cape and the Islands as well as coastal areas of Rhode Island and Connecticut.

As far as timing goes, the snow should overspread Southern New England from south to north Saturday morning, reaching the Shrewsbury area right around noon.   It will snow lightly into Saturday night and come to an end from west to east Sunday morning.

There are wind concerns with this storm, and coastal interests should monitor this situation carefully.  While it will become blustery, very strong to damaging winds are not likely over inland areas.  The real wind concern is for coastal areas of all Southern New England.  With the full moon on Saturday, tides will already be at astronomically high levels.  The wind field of this storm will be large and powerful, with some gusts along the coast and over the water possibly reaching 65+ mph.  This is also a relatively slow moving storm, and will impact several tide cycles with large and battering waves and a storm surge before it pulls away from us.  The consequences of this will be some pockets of moderate coastal flooding with isolated areas of major flooding possible.  Due to the very high waves (I would not be surprised to see 30+ foot waves offshore) generated by the storm, beach erosion will likely become major to severe along east facing beaches.  Offshore waters will become extremely hazardous to the maritime community, who should seek safe harbor until this storm passes.

I have attached two graphics from the National Weather Service depicting these coastal concerns.

Though I dislike disclaimers, the track of this storm is certainly not etched in stone just yet.  It is still wobbling and with the very sharp snowfield cutoff, a wobble one way could bring us a lot more snow than I now expect.  A wobble the other way and we would see no snow at all.  This is one of the things that make New England weather so interesting and hard to predict at times. 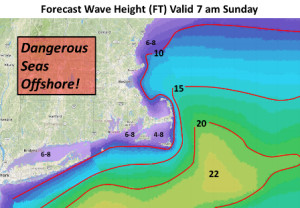