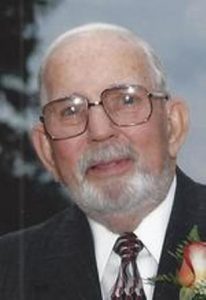 Fred was born March 29, 1925 in Windham, N.H., son of the late Beulah (Phillips) and John A. Wilson. He grew up in Worcester, graduating from Commerce High School and Worcester Junior College.

Fred served proudly in the U.S. Army during World War II, and following his military service. After retirement, he also worked at the Worcester Art Museum.

While Fred might not have referred to himself as a Renaissance Man, he led a robust life with many interests. He loved sailing, camping, photography, golfing, following the investment markets, and dabbled in painting, as well. He and Lucille traveled to Florida and South Carolina for many winters following his retirement. They also took a trip across America, visiting national parks along the way. Closer to home, he followed the Boston Red Sox and the New England Patriots.

In lieu of flowers, you may honor Fred with a memorial donation to the Alzheimer’s Association – MA/NH Chapter, 100 North Parkway #105, Worcester, MA 01605 or online at www.Alz.org.

All are welcome to gather with Fred’s family Friday, Jan. 13, from 9:30-11 a.m., at Roney Funeral Home, 152 Worcester St., North Grafton, followed by a prayer service at 11 a.m. in the funeral home. He will then be laid to rest with military honors at St. Phillip’s Cemetery in Grafton.

Please visit the Book of Memories for Fred at www.RoneyFuneralHome.com to share a memory, story or message of sympathy with his family.