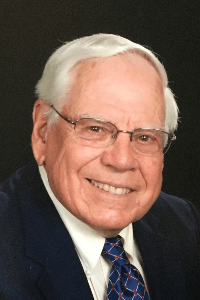 Hudson – Hugo George Guidotti Jr., 83, passed away at home, surrounded by his loving family, Tuesday, Feb. 28, 2017 after a courageous battle with pulmonary fibrosis.

Born in Somerville in 1933 to Dr. Hugo George Sr. and Mary Keblinsky Guidotti, Hugo had been a Hudson resident since 1944.

A driven man from an early age, Hugo developed his athleticism and went on to lead HHS sports in baseball, basketball and football. He graduated in 1951 from Hudson High School, where he particularly excelled as a first baseman. He received a baseball scholarship to Yale, where he captained the 1954-55 baseball team, was a member of Skull and Bones, and was awarded the Boxing Gold Glove from the University. The next two years he traveled across the country playing minor league baseball with the Kansas City Athletics Organization. He then graduated with a Bachelor of Science degree and received his Master’s in teaching from Boston College.

Hugo and Sally Crossman married in February 1956 and soon after he began a career as a chemistry and physics teacher that would span 30 years and positively impact the lives of countless public school students. He was chair of the science department, president of the Hudson Teachers Association, coached basketball and football, and was head coach of the baseball team for 22 years, leading several of his teams to victory in the state championships. Along with his brother-in-law John Crossman, he founded Hudson’s summer baseball “Pony League” and spearheaded Hudson High’s Athletic Hall Of Fame with his longtime friend, Vic Rimkus. In 1987, he was inducted into Massachusetts Baseball Hall Of Fame.

Hugo humbly dedicated his life to serving others, but above all he truly enjoyed spending his time with the love of his life, Sally, and their five children on Lilac Lane or on yearly camping trips up to Maine. Throughout his life, Hugo was a passionate gardener, growing vegetables for family and friends.

After he retired as a teacher, he joined the Massachusetts Realtor’s Association to help people find and purchase homes in and around the Hudson area. Despite being “retired,” he never really slowed down, still remaining an active figure in town life, at St. Michael’s Parish, and in the lives of his 12 grandchildren.

As a grandfather, Hugo was a loving, knowledgeable figure who could always be relied upon to teach his grandchildren something new; from how to hit a baseball to how to plant tomatoes. His grandchildren have many happy memories of clam digging with him on their yearly trip to Hermit Island Maine.

Eventually, Hugo was pleased to sell the house he built on Lilac Lane to his middle daughter, under the conditions that he was still allowed to mow the grass and weed the garden when he had the time. He and Sally quickly settled into their new community at Quail Run.

Hugo is survived by his wife, Sally Guidotti; their five children, Michael Guidotti and Deborah, Mary Ann Guidotti-Romanello and Bruce, Ann Marie Guidotti-Parness and Joel, Paula Guidotti-Filippi and Darryl, and Sarah Guidotti-Ireland and Jim; 12 grandchildren; and one great-grandchild. He is also survived by his sister, Louise Carney; his sisters-in-law, Barbara Guidotti and Mary Denine; his brother-in-law, John Crossman; and nieces and nephews. He was predeceased by his brother, Charles Guidotti.