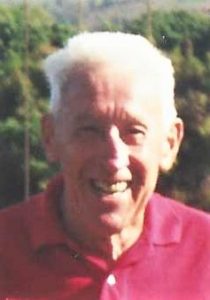 Marlborough – Robert P. Connors, 96, of Marlborough, died Thursday, March 16, 2017 at Marlborough Hills Healthcare Center. He was the husband of Helen T. (Marr) Connors for the past 52 years.

Robert was born, raised and educated in Marlborough the son of the late Francis and Mary (Reilly) Connors, and was a graduate of Marlborough High School. Following graduation, he worked at LaPoint Machine Tool Co. in Hudson. He was a U.S. Navy veteran of WWII and served in both theaters of War. After the war, he joined the Army National Guard and worked at Fort Devens from 1947 until his retirement in 1981. There he served in many capacities, but primarily as an electrician and technician and he rose to the rank of Sergeant Major.

He was a member of Immaculate Conception Church. He was an accomplished golfer and was a member of the Marlborough Country Club for decades.   Upon retiring he continued to play while spending winters in Florida. He was well known in the runner community in the greater Marlborough and Fort Myers, Florida area. He ran countless races and won many in his age group throughout the 1980s,

Besides his wife, he leaves four nephews, Robert K. Connors of Westborough, Richard Connors of Southborough, Francis Connors of Dowington, Pa., and Philip Connors of Sudbury; two nieces, Elizabeth Kelso of Nashville, Tenn. and Jean Dion of Hudson; and many grandnephews and grandnieces. He was brother of the late Francis and Leo Connors.

A Mass of Christian Burial will be celebrated Wednesday, March 29, at 11:00 a.m., in Immaculate Conception Church, Prospect Street. Burial with military honors will follow at Evergreen Cemetery, Wilson Street. A time of visitation will be held prior to the Mass from 9-10:30 a.m. in the Fitzgerald & Collins Funeral Home (www.CollinsFuneral.com), 378 Lincoln Street, Marlborough.

In lieu of flowers, donations may be made in his memory to Alzheimer’s Association at www.alz.org.

All are invited to sign Robert’s online guestbook at www.CollinsFuneral.com.