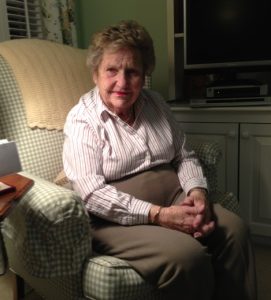 Born Sept. 13, 1923 in Blackstone, Va., she was the daughter of John and Pattie Cumby.  Elizabeth graduated with honors at the age of 16 from Blackstone High School. She attended Mary Washington University and majored in English with minors in French and music. While there, Elizabeth co-organized and directed a choral group, the Victory Chorus, in which she sang and played piano. The well-known choral group performed on campus and at functions in Fredericksburg and Richmond. She earned her B.A. and graduated with honors in 1944.

Elizabeth met her future husband, Philip Murray, on a blind date while he was stationed at an Army camp outside of Blackstone. They were married July 15, 1945. In 1951, Phil and Elizabeth moved to Nantucket. Elizabeth always described their move to the island as “coming to a foreign country.” Together they raised their three children in Monomoy where they lived for 48 years.

Phil took over Murray’s Toggery Shop on Main Street from his father in 1951.  Elizabeth was the mainstay, assisting with sales and bookkeeping. One of their most successful items was, and still is, the Nantucket Reds collection. Together, they built a successful business, and it continues so to this day.

Elizabeth was an avid and skillful bridge player; she enjoyed travelling, music and choral programs, reading, and bingo at Sherburne Commons where she was often the caller.

More than anything, Elizabeth loved her family and life on Nantucket, her home of more than 68 years.

A funeral service will be held at St. Paul’s Church of Nantucket Friday, Oct. 6, at 11 a.m., followed by internment at the New North Cemetery on New Lane.

In lieu of  flowers, donations in her name may be made to the Nantucket Cottage Hospital or PASCON.