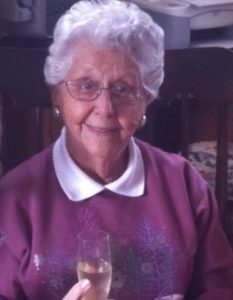 Hudson – Claire V. (Dumas) Temple, 89, of Hudson, passed away peacefully at home Dec. 21, 2018, surrounded by her adoring family, after a period of declining health. She was predeceased in 2007 by her beloved husband of 59 years, John W. Temple Jr.

In 1947, she married her high school sweetheart, John W. Temple Jr. They spent two years living in Maryland while John was station at Aberdeen Proving Grounds. After discharged from the army, they moved to New York where John received his Bachelor’s degree from Alfred University. After college, they moved to Hudson in 1955 and resided there until her death.

Claire is survived by her two daughters, Joanne C. Fox of Clinton and Jane E. Carlson and her husband Anthony Danzilio of Hudson, and four grandchildren, Kristen A. Carlson of Hampton, N.H., Kellyn E. Carlson of Hudson, Nathan J. Fox of Portsmouth, N.H., and Aaron S. Fox of Lake Tahoe, Calif. In addition to her husband, John Temple, and her parents, she was also predeceased by her sister, Fay DeRuvo, and brother, Edward Dumas.

A graveside prayer service will be held Saturday, Jan. 5, at 11 a.m., at Forestvale Cemetery in Hudson. Tighe Hamilton Regional Funeral Home is honored to be assisting with Claire’s arrangements.

In lieu of flowers, memorial donations can be made in Claire’s name to Saint Michael Parish, 21 Manning St., Hudson, MA, 01749.