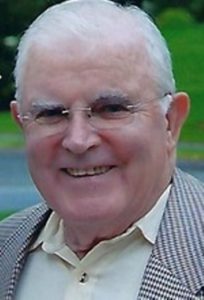 Born Dec. 29, 1932 in Worcester, son of the late James and Helen (McGillicuddy) Hurley, Jim moved to Emeraldale, his family’s farm in Shrewsbury, during junior high. He graduated from St. John’s High School, where, as an all All-City athlete, he captained both the football and baseball teams. Jim graduated from the University of Notre Dame, class of 1954. He enjoyed returning to South Bend for reunions and for an annual football game with his son and grandson to see the boys play. Jim was a proud U.S. Army Veteran, serving in Alaska during the Korean War.

Jim met Anne, the love of his life, after Mass at St Mary’s where they married upon his return from service.

Jim’s career in the steel industry spanned several decades. He was president of Emerald-Ale Inc. which owned Belmont Liquors in Worcester and later worked at Hewlett Packard in Shrewsbury.

Jim and Anne enjoyed wintering on Marco Island. Gramp’s true passion was his grandchildren, never missing a school or sports event, the opportunity to drive them to any activity, or to take them to lunch at the Deli. Jim enjoyed playing senior softball for many years, and was instrumental in expanding the Shrewsbury team.

Jim is survived by his daughters, Annemarie Hurley, Colleen Gardner and her husband Scott of Shrewsbury; his son, James Hurley and his wife Patricia of Holden; his grandchildren, Caitlin, J. Joseph, Meaghan, Kristina, Eileen, Maura, Elizabeth, Victoria and Sheila; his great-grandson, Rory; his brother, David Hurley and his wife Dale; and nieces and nephews.