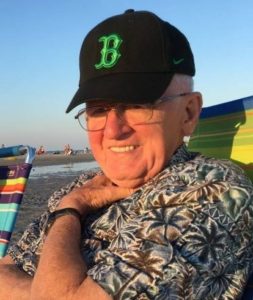 Richard was born March 21, 1935 in Waltham, one of 10 children of the late Augustus and Marguerite (Aucoin) Hanlon. He graduated from Saint Charles School in Waltham and subsequently served his Country in the United States National Guard for eight years. He settled in Watertown with his beloved wife, Marilyn, where they raised their five children and lived until moving to Hudson 20 years ago.

Richard had a long and successful career as a manager for New England Telephone, eventually retiring after 38 years from Verizon.

Richard was an avid WWII and history buff and a fierce lifelong Boston Red Sox fan. He also enjoyed traveling, spending time during the summer at his favorite campground in Wareham and winters in Florida, where he loved to watch the Red Sox play their spring training games.

Richard was a low key and humble person, who was happiest spending time with his family whom he adored.

In addition to his wife, Marilyn D. (Maloney) Hanlon, he is also survived by his five children, Karen J. Murphy and her husband Gregg of Maynard, Elizabeth L. Maffattone and her husband Nicholas of Londonderry, N.H., Peter F. Hanlon and his wife Sandra of Westborough, Thomas R. Hanlon and his wife Susan of Dorchester, and Andrew A. Hanlon and his wife Alison of Lowell; five siblings, Jeannine Davis, Michael Hanlon, James Hanlon, Marylou Hanlon and Terence Hanlon; seven grandchildren, Cara and Kathleen Murphy, Juliana, Joseph and Amy Maffattone and Emily and Jake Hanlon; and many nieces and nephews. He was also predeceased by four siblings, Paul Hanlon, Maurice “Moe” Hanlon, John Hanlon, and Marguerite Sullivan.

Relatives and friends are invited to a period of calling hours Thursday, Feb. 28, from 4-7 p.m., at Tighe Hamilton Regional Funeral Home, 50 Central St., Hudson. A funeral cortege will process to Saint Michael Parish, 21 Manning St., Hudson, for a 9 a.m. Mass of Christian Burial on Friday, March 1. Burial will be private.