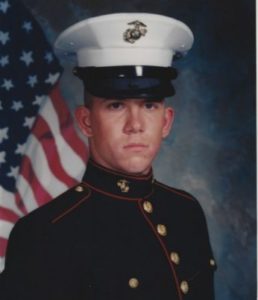 John was born Aug. 17, 1972, in Aurora, Ill. He was the beloved son of N. Janet Davenport and the late James J. McKean. John was raised in Marlborough and graduated from Marlborough High School (MHS) in 1990. While at MHS, John played many sports and was a star trumpet player in the MHS band. After graduating from MHS, he enlisted in the United States Marine Corps and honorably served his nation from 1991 until 1996.

Throughout his life, John was a talented athlete and excelled at every sport he played, including baseball and soccer, and had a passion for snowboarding and BMX bike riding. John was also a gifted musician, who played several instruments, including the piano, guitar, and trumpet. In addition, he was a great cook and made the best stuffed mushrooms on earth. Most importantly, John had a big heart. He deeply cherished and adored his two daughters, Maia and Maeve, and loved spending time with his many nieces and nephews.

Relatives and friends are invited to a period of calling hours Thursday, March 14, from 5-8 p.m., at Tighe Hamilton Regional Funeral Home, 50 Central St., Hudson. A funeral service will be held the following day, Friday, March 15, at 10 a.m., in the funeral home, followed by interment at Evergreen Cemetery of Marlborough.