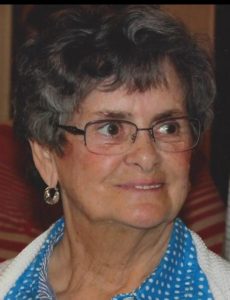 Hudson – Eleanor M. (Travis) Nunes, 85, a lifelong Hudson resident, passed away peacefully at home, surrounded by her family, after a period of declining health. She leaves behind her beloved husband of 67 years, Oliver F. Nunes Jr.

Eleanor was born in Hudson on Dec. 12, 1933, a daughter of the late Ralph and Ruth (Lawson) Travis. She attended Hudson High School and graduated in the class of 1951. Eleanor had a long and devoted career with the Hudson Public Schools as a school secretary, before eventually retiring. She was a lifelong devout member of Saint Michael Parish in Hudson.

Eleanor’s life was her family. Spending time with her family was so special to her. In addition to being with family, she enjoyed traveling and dining out. She also enjoyed taking trips to the casinos and playing mahjong. Eleanor loved the ocean and split her time between Hudson and Truro in the summers and Fort Myers, Fla. in the winters.

Calling hours will be held Thursday, April 25, from 4-7 p.m., at Tighe Hamilton Regional Funeral Home, 50 Central St., Hudson. On Friday, April 26, a funeral cortege will process from the funeral home to Saint Michael Parish, 21 Manning St., Hudson, for a 9 a.m. Mass of Christian Burial, followed by interment in Forestvale Cemetery in Hudson.

In lieu of flowers, memorial donations can be made to Dana-Farber/Brigham and Women’s Cancer Center at Milford Regional Medical Center, 20 Prospect St., Milford, MA 01757.