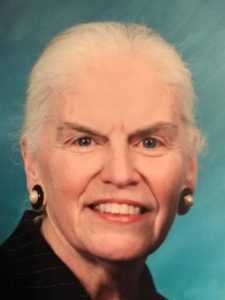 Westborough – Jane P. Kruse, 80, of Westborough, passed away Aug. 11, 2019 at the UMass/Memorial Healthcare-University Hospital in Worcester. She was the beloved wife of Richard W. Kruse.

Born in Westfield, she was the daughter of the late Ernest and Jeanette (Roney) Pero. She was raised and educated in Westfield and Westborough and was a 1956 graduate of Westborough High School. She also graduated from Massachusetts College of Art in Boston.

Jane was an art teacher with the Northborough Public Schools and for many years was a floral designer at the former Mildred’s Flower Shop. Her artistic talents were endless.

In addition to her husband, she is survived by three children, Meredith E. Kruse and her partner, Michael McAuliffe of Worcester, Scott F. Kruse and his wife, Marnie, of Fairfield, Conn., and Allyson K. Moreno and her husband, John, of Bourne; one brother, Ted Pero of Somers, Conn.; one sister, Ernestine Vermette of Stratford, Conn.; and seven grandchildren, Ben Kruse, Ryan Kruse, Maggie Kruse, Noah Moreno, Jacob Moreno, Hannah Moreno and Sam Moreno. Her greatest joy in life was being a grandmother.

In lieu of flowers, donations in her memory may be made to the American Heart Association.