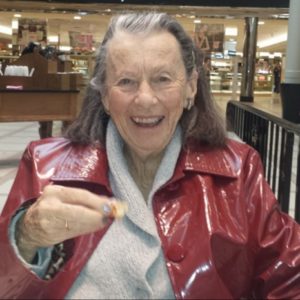 Elise, the oldest of five children, grew up in her beloved city of Ansonia, moving several times as the family grew and eventually prospered. She went through the Ansonia Public School system and later through Saint Mary’s High School in New Haven from which she graduated in 1948.

After high school she was admitted to the RN program at Greenwich Hospital, where she excelled as a student and went on to become a successful OR nurse. Equally important, she developed friendships with classmates, some cherished, one lasting for her entire life.

Elise married Vincent Zarrilli in 1954 and moved to Massachusetts, where she had five children between 1956 and 1964. The family settled in Sudbury. Despite the strong life challenges during the seventies, she demonstrated the toughness and determination her family and friends so admired. Inspired by the real estate career of her father, she obtained her broker’s license, and success selling houses in the Sudbury area soon followed. She concurrently worked nights at the Framingham Detox Center as a nurse.

The single greatest tragedy of Elise’s life was the death of her youngest child, Paul, at age 32 of heart failure after chemotherapy. Her strength was tested as never before with his death. Though she persevered and demonstrated happiness in the decades that followed, she deeply missed Paul and spoke of him often for the rest of her life.

Elise loved spending time on Cape Cod with her family. She loved to sing patriotic songs with her grandchildren and attended every Irish and American parade she could find.