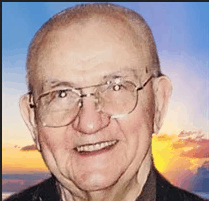 Shrewsbury – Francis W. “Fran” Rimkus, 91, Longtime resident of Shrewsbury, died Sept. 22, 2019 with family by his side. He was born in Fitchburg, the son of John and Katherine Rimkus and graduated from Fitchburg High School in 1946.

He is survived by his wife of 65 years, Doris J. (Richard) Rimkus of Shrewsbury, and his children, Joanne Billings and her husband Richard of Northborough, Janice Wingood and her husband Duncan of Suffield, Conn., Katherine Grenier and her husband Joseph of North Falmouth, and John Rimkus and his partner Susan Cusson of Shrewsbury. He also leaves his nine grandchildren, James and Kerry Claflin of Shrewsbury, Jeffrey and Kathryn Wingood of Jupiter, Fla., Joshua Claflin of Gardner, Justin and Nicole Wingood of Indianland, S.C., Matthew and Cheri Grenier of Natick, Nicole Grenier and Josh Handy of Waltham, Brittaney Rimkus of Leominster, Rebecca Rimkus of Shrewsbury, and Katie Grenier of Boston; 9 great-grandchildren; and several nieces and nephews. He was predeceased by his parents; his brothers, Joseph and John Kozloski; and his sister, Helen Lakutis, all of Fitchburg.

Fran served in the United States Army during the Korean War and worked as a pressman in Worcester for 50 years, retiring in 1996. He was a past Grand Knight and member of the Shrewsbury Knights of Columbus, Adelphi Council 4181. He was the coordinator of the Shrewsbury Senior Center newsletter and a volunteer driver with the meals-on-wheels program. He enjoyed summers in Old Orchard Beach, gardening, golfing, bowling, bocce and followed all Boston sports teams.

The family would like to thank all the caregivers from the VNA Hospice Service, Worcester, and Home Instead Senior Care of Northborough.