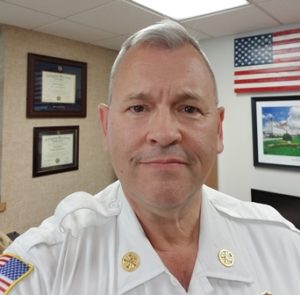 Marlborough – City Fire Chief Kevin Breen has been a firefighter for approximately 34 years and is wrapping up his first term in Marlborough.  The City Council unanimously approved Mayor Arthur Vigeant’s recommendation to reappoint Breen to a second five-year term that officially starts July 1 and ends in June 2025.

Breen said he has two families.  He raised his four kids with his wife, the “love of his life” in Salem, N.H. and started as a firefighter in Salem in 1986.  He rose through the ranks serving for 10 years as Fire Chief of that town. He said that members of the Salem and Marlborough fire departments are “some of the finest people I’ve ever met in my life and extremely giving people that truly care about their communities.”

The city of Marlborough had gone through several leadership changes in the Fire Department and hired an independent consulting company to conduct an organization assessment of the department including strengths, weaknesses, necessary improvements, and goals. The report was completed in 2014.

Breen said he had heard about the position in Marlborough from one of his mentors, who was a consultant and involved in the assessment report process.  After leading the Salem Fire Department for nearly a decade, Breen said he felt he had done all he could do and achieved his goals and that he wanted to move to a department where he could have an impact.  His mentor explained the similarities in the two communities so Breen was intrigued as he reviewed the final “200-plus” page assessment report on the Marlborough Department and thought it would be a good fit for him.

“The community has to select the right chief, but the chief has to apply to the right community,” he stressed.

He said he went through the lengthy application and review process and felt he had the support of the mayor, the City Council and community leaders he had met with and accepted the offer to take the job in 2015.

As for this term, Breen said his top two goals are to have a west-side fire station/public safety facility up and running (that includes moving the city’s dispatch center currently located at the Police Station), increased staffing per shift and quicker call response times.

Because there currently is no fire station west of Route 495 and the commercial and residential population growth has exploded, it is impossible, at times, to respond to calls in the time often required.

“I will consider it a failure on my part if we’re not able to do this (a new station up and running during this term),” Breen said.  He went through the process of building a new fire station while in Salem and knows what it takes, he said.

On the staffing side, Breen said they are in the process of filling three entry-level firefighter positions.  He put together a panel made of fire department members, union members and community leaders.  The panel received 57 applications and have passed 21 applicants to him for to interview for the three spots.

Breen’s passion is palpable.  He is a member of the Rotary and a true part of the community.

“I come to work every day with the mindset to solve problems so they (the fire department) can do their jobs.”

Chipotle to be proposed for Wayside Crossing plaza