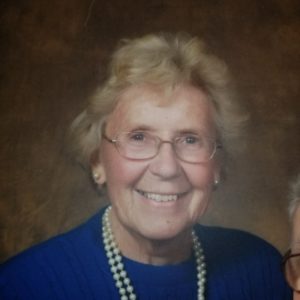 She was born in Worcester to James and Annie (Tait) Cunningham, she spent part of her childhood in Whitinsville before moving to Worcester. She graduated from Commerce High and worked as an Administrative secretary, she retired from UMass Memorial Medical Center, after more than 30 years in 2005.

Jean was a past matron of Clement Chapter order of the Eastern Star and a lifetime member of the order. She was also an active member of Thistle Lodge #2 Daughters of Scotia.

She was an avid knitter and made her grandchildren all sorts of sweaters, mittens and hats over the years. Jean and Dan spent many happy years traveling to many venues with the Clan Sutherland Pipe band that Dan was a part of. She took great pride in her Scottish ancestry.

Jean was a member of the First congregational church of West Boylston and had served on the Board of life and was part of the prayer shawl ministry.

Relatives and friends are invited to attend her funeral home service on Wednesday, October 14th at 11:00 am. at the Chiampa Funeral Home ~ 5 Church Road, On the Common, Shrewsbury Center.

In lieu of flowers memorial contributions in Jean’s honor may be made to the Animal Rescue League of Worcester, 139 Holden Street, Worcester, MA 01606 or the First Congregational Church Memorial Fund, 26 Central Street, West Boylston, 01583.