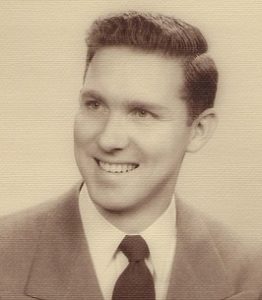 Northborough – John J. Donahue, 95, of Northborough and formerly of Paxton, passed away peacefully Nov. 22, 2020 at UMass Memorial Hospital. He was predeceased by his beloved wife of 57 years, Mary M. (Joyce) Donahue, in 2016.

Born in Leicester and raised in Worcester, John was one of three sons born to the late John F. and Mary A. (O’Neil) Donahue. He graduated as President and Valedictorian of his class from St. Peter’s High School in Worcester, later graduating from College of the Holy Cross in 1950. John received his Master’s degree in English from Worcester State College.

He began his 37-year teaching career in Worcester Public Schools at Chandler Junior High School, with English and Latin, and then taught English at Classical High School. He retired after many years of teaching English at Doherty Memorial High School. John and his beloved Mary settled in Paxton to raise their family and lived there until 2015.

John loved animals, especially birds and dogs, raising Afghan hounds. He also loved music and enjoyed opera, symphony, and classical. John played the piano and was the organist at St. Columba Church in Paxton for many years.

John will be remembered as a kind, gentle soul who would do anything for anyone. He will be deeply missed by his loving family and friends.

His family would like to thank the entire staff of Whitney Place in Northborough and his caregivers at UMass Memorial, for their kindness and compassion.

In lieu of flowers, memorial donations may be made to College of the Holy Cross at https://www.holycross.edu/alumni/support.

John’s funeral Mass will be held privately for his family, and burial will be with his wife and parents at St. John’s Cemetery, Worcester. The Britton-Shrewsbury Funeral Home, 648 Main Street, Shrewsbury is honored to be assisting with arrangements.