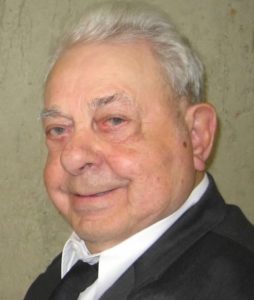 Jose was born and raised in Santa Maria, Azores, the son of the late Joaquim Barros and Maria de Andrade, where he worked as a carpenter. He met and married his loving wife Maria Helena in 1949. He emigrated to the United States in 1975 and in 1976 his wife along with seven of their children joined him and settled in Hudson.

Jose worked for Data General in Southborough and Milford for many years until his retirement in 1987. He and Helena would travel to Santa Maria annually to vacation and visit family.

Jose was a master carpenter. He made many projects for many people and with his woodworking talent he also made a guitar for each one of his children. He loved tending to his garden and his grapevine, but most of all he loved spending time with his family and playing cards “sueca” with them. He will be missed by many.

All are invited to attend his visitation of Sunday, Jan. 17, from 4-7 p.m., at Tighe Hamilton Regional Funeral Home, 50 Central St., Hudson. His Mass of Christian Burial is Monday, Jan. 18, at 9 a.m., in St. Michael Parish, 21 Manning St., Hudson, with burial to follow in St. Michael Cemetery.