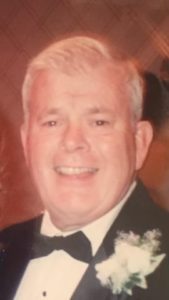 Hudson – Thomas Cuthbert Holmes, 88, of Hudson, passed away peacefully at home, surrounded by his loving family, on March 24, 2021 after a period of declining health. He leaves behind his beloved wife of 58 years, Carol Ann (Zenick) Holmes.

Thomas was born on Dec. 30, 1932 in Boston, the only son of the late Thomas and Margaret (Hickey) Holmes. He was raised in Charlestown, where he graduated from St. Francis de Salles High School. After graduating he bravely served his Nation in the United States Air Force during the Korean War from 1952 until 1956, earning the rank of Staff Sergeant.

After returning home from service, he enrolled at Boston University, where he earned his bachelor’s degree in journalism and subsequently began working for Polaroid Company in the Production and Safety Administration, retiring at the age of 62 after 37 years of service to the company.

Thomas moved to the Stratton Hill neighborhood of Hudson in 1964, shortly after marrying the love of his life, Carol Ann (Zenick) Holmes. Together they raised three beloved daughters and were active members of the community.

He was a member of the Hudson Senior Center and longtime member of the Hudson American Legion. Throughout his life, he was a devout Catholic and longtime parishioner of Christ the King, and Saint Michael Parish, where he attended masses regularly.  He was also an avid golfer and loved listening to music and going on long walks, especially in his neighborhood where he was friends with all his neighbors.

Thomas was a loving and gentle man who cared for all of God’s creatures. He cherished spending time with his family and loved to go places and travel with them. He had a great sense of humor and will be remembered for the many funny stories he told. He will be missed greatly by all who knew him.

In addition to his beloved wife, Carol Ann (Zenick) Holmes, he is also survived by three daughters, Margaret “Meg” Deane of Hudson, Ruth Ann Kennedy and her husband Kyle of Owens of Cross Roads, Al., and Carol Holmes Burgess of Hudson; and five grandchildren, Thomas O’Loughlin, Victoria Kennedy, Zachary Burgess, Meghan O’Loughlin, and Colleen Kennedy. He was also predeceased by his sister, Margaret Mechan and her husband Kenneth, and his son-in-law, John Deane.

Relatives and friends are invited to a period of visitation on Sunday, March 28, from 4-7 p.m., at Tighe Hamilton Regional Funeral Home, 50 Central St., Hudson. A Mass of Christian Burial will be celebrated on Monday, March 29, at 9 a.m., at Saint Michael Parish, 21 Manning St., Hudson, followed by a procession to Forestvale Cemetery for Committal and Military Honors.

In lieu of flowers, memorial donations can be made in memory of Thomas C. Holmes to the Hudson Senior Center, 29 Church St., Hudson, MA 01749.