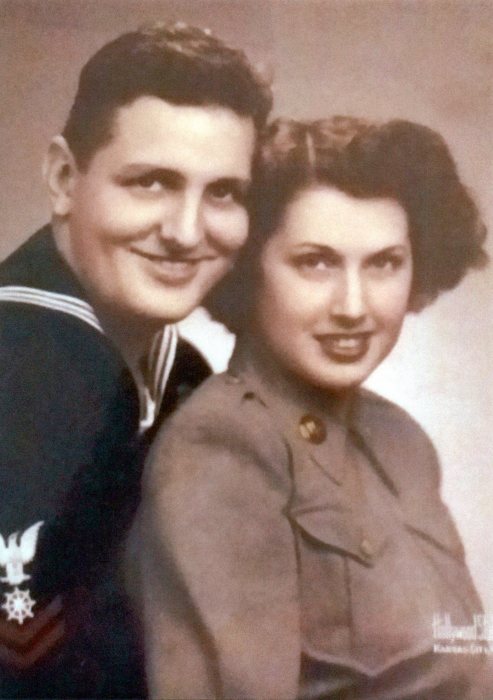 Hudson – James “Jim” F. Mulloney, 97, of Hudson, formerly of Stow and Marlborough, died peacefully at home on April 22, 2021, surrounded by his family. Jim was born in Somerville, the son of the late James Mulloney and Marion (Ryan) Mulloney.

He attended Arlington Catholic High School where he excelled in academics and sports and then went on to Boston University. Jim enlisted and proudly served his country as a member of the US Navy serving on the carrier US Bennington CV-20 during WWII as a navigator.

While in the Navy Jim met the love of his life Louise W. (Pallinder) Mulloney (deceased). They shared 57 years as husband and wife.

At the end of the war Jim started his career at Raytheon and soon became very active in the local union after seeing the poor working conditions and benefits that the members were receiving. He started as a Shop Steward, then became President and two years later he was elected Business Manager of Local 1505 of the IBEW.

In this role Jim was the Chief Negotiator for the union during contract talks and worked tirelessly to protect the members rights guaranteed under the collective bargaining agreement.

As a result of his demonstrated leadership of Local 1505 he was elected as 2nd District Executive Board Member for the IBEW representing the New England District. Jim was held in high regards for his oratory skills, quick wit and his ability to command a room. The role as a union leader was special to him as he was able to affect thousands of people’s lives in a positive way. This included improving working conditions, instituting technical training programs, higher wages, better medical benefits and fully paid pensions.

He was extremely proud that he was able to enable women to obtain and excel in prominent technical and leadership roles. His efforts and along with his team benefitted the overall quality of life for all its members. He held both leadership roles within the IBEW for a period that spanned four decades until his retirement. Jim played an active part in local and state politics and became close allies to key democratic figures including the Kennedy’s, Speaker of the House Tip O’Neil, Barney Frank and many congressmen and senators.

Upon retirement Jim and Louise spent the winter months in Florida enjoying the weather, time with their friends and an occasional trip to Gulfstream to play the horses. They always made it to Saratoga at least once during each August. They travelled to Ireland and Europe and he always joked that while traveling on the Rhine, he could not find a bad beer or glass of wine.

Funeral services were held on April 26, at 9 a.m., held at St Michael’s Parish Church in Hudson, followed by burial at Forest Valle Cemetery in Hudson. A celebration of Jim’s life will be held at a later date. Tighe Hamilton Funeral Home of Hudson assisted with arrangements.