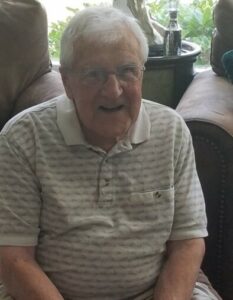 Born on Aug. 25, 1922 in Marlborough, he was the son of the late George and Marie (Vigeant) Marsan. He was born and raised on Broad Street in Marlborough, and after graduating from St. Anthony’s School, he attended trade school in Worcester to pursue training as an electrician.

He joined the U.S. Navy in 1942, where he put his skills to work as an electrician on the Navy destroyer escort, the U.S.S Gilmore, stationed near the Aleutian Island chain in the Pacific Ocean. He was honorably discharged from the Navy in 1946 and began working in the Marlborough area as an electrician. About a decade later, he struck out on his own to form his own electrical contracting company, Arthur J. Marsan Electrical Contracting.

He had met and married Gloria Evelyn Bissonnette on returning home from the war. In 1953, they bought a home on Huntington Avenue in Marlborough, and they had two sons. They remained married for 49 years until Gloria’s death in 1996. Mr. Marsan remained in the family home until 2003, when he moved to Northborough. Most recently he lived at Coleman House, where he moved for health reasons.

As a father, he was a devoted parent to his two sons, whom he and his wife packed into the car for many vacations and day trips throughout New England. Among their shared interests, he and his wife enjoyed listening to opera music, and later in life they attended operas together.

After retirement, he developed a bigger lust for travel and his adventures spanned dozens of countries, including Europe, Russia, Canada, and he visited many destinations in the United States.

Over the decades he took pleasure in keeping in touch with his fellow Navy Veteran friends as well. He taught himself to refinish furniture, which he took up as a hobby. He became quite skilled at caning chairs.

He leaves his two sons, Richard Marsan (Megan) of Marlborough and Marc Marsan (Kati Reusche) of Boston. “Pip,” as he was known to his family, loved spending time with his eight grandchildren, Kate, David, Cara, Amanda, Joseph, Colin, Rachel, and Brooke, and 10 great-grandchildren, Rachelle, Michael, Kellan, Amy Lou, Mia, Colton, Liam, Nicholas, Livia, and Ian. He also leaves many nieces and nephews. He was also predeceased by his wife, Gloria, and by brother George Marsan, and sisters Jeannette Gaudette, Adrienne Wolcott, and Marie Marsan.

Visiting hours will be held on Monday, July 26, from 10:30 a.m. to 12 p.m., at the Slattery Funeral Home, Inc., 40 Pleasant St., Marlborough. A funeral service will be held in the funeral home following calling hours. Burial will follow at St. Mary’s Cemetery, Beach Street, Marlborough.