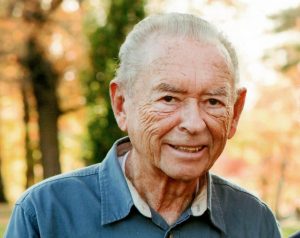 Bob was born on January 10, 1931 to the late George and Helen Bausch in Jamaica Plain where he was raised.  He graduated from Boston Tech High School in 1948.  Bob served in the United  States Air Force from 1948-1952 when he was honorably discharged.  Bob worked for Raytheon for 40 years as an electrical engineer and went to night school where he attained his Engineering Degree from Northeastern University.

After marrying on October 22, 1950, Bob and Shirley resided in Jamaica Plain until moving to Hudson in 1963 where they raised their 3 children and still reside today.

In addition to his wife, Bob leaves two daughters; Janis Bausch of Hudson who not only resided with him but also was his caretaker during his declining health, and Karen Calnan and her husband George of Hudson.  He leaves three grandchildren; Stacey Davis and her husband Matt, Adam Conley and his wife Ashley, and Kristen Luz and her husband Hernani.  He also leaves 7 great grandchildren; Alyssa, Jillian, and Brynlee Davis, Cameron, Brody, and Owen Conley, and Coby Luz.  Bob is also survived by many nieces and nephews.  In addition to his parents, Bob was predeceased by his son, Robert W. Bausch, and his brother, Frank Bausch.

Bob was an active and faithful member of Saint Luke’s Episcopal Church in Hudson for over 50 years where he volunteered much of his time doing whatever was needed.

Bob was a kind, caring, hard-working family man. He was a quiet guy but always had a smile and a little joke to share. He was an avid baseball fan and loved watching the Red Sox. But most of all, Bob loved spending time with his family. He loved attending his grandchildren and great grandchildren’s events, whether they be sporting or cultural. He and Shirley owned a second home on Cape Cod for many years which brought him great joy. He loved the ocean and often was sure to get his last swim of the season in the month of October. Bob will be truly missed by his family.

In lieu of flowers, memorial donations can be made in his name to the Arthritis Foundation, 29 Crafts Street #100, Newton MA  02458.