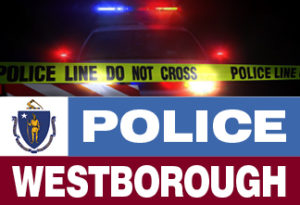 WESTBOROUGH – Police were still searching for a Stoneham man as of Friday afternoon after he allegedly stole a car to avoid officers the previous day, according to court documents.

The suspect has been identified as John M. Farrell, 33.

Warrants filed with Westborough District Court describe him as a white man with red hair standing about about 5’9.

Officers received a report on Oct. 13 at 7:48 p.m. that Farrell had left Spectrum Health Services against medical advice.

Police said there were six active warrants for his arrest.

One officer said he believed she saw Farrell in Xtra Mart on Turnpike Road. Officers then found a man, who said he was Farrell, walking in the parking lot.

Officers wrote that, when they told Farrell he was under arrest, “John immediately looked to his right and took off in a sprint in the parking lot towards Turnpike Road.”

Police caught up with him according to documents.

One of the officers reportedly grabbed the back of Farrell’s sweatshirt and took him to the ground. Officers said he was “violently kicking” and “throwing elbows at both of us to evade arrest.”

Farrell slipped out of his sweatshirt and took off running behind the Green Thumb garden center. An officer chased him before Farrell ran onto Turnpike Road, crossed the barrier and ran into the parking lot of Decks Plus.

“As I started to catch up to Mr. Farrell, he dove into a heavily bushed area and started to crawl through multiple brush,” officers wrote.

The office entered after him, but wrote that his equipment belt became tangled, preventing him from going further.

Officers set up a perimeter between Decks Plus and Curry Printing.

Westborough deployed their K-9 unit, which tracked Farrell to Deerfield Way. According to the warrant, one of the homes had a garage door open. Police cleared the empty garage and didn’t find Farrell.

The homeowner then told police that her car was missing.

A State Trooper told police that a vehicle registered to the address drove past him about 20 minutes before.

Westborough police issued two warrants on charges of motor vehicle larceny, breaking and entering in a building with the intention of committing a felony, disorderly conduct, disturbing the peace, resisting arrest and two counts of assault and battery on an officer.