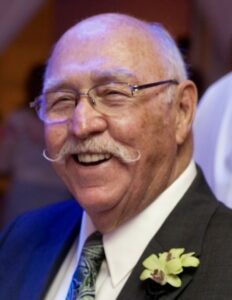 Marlborough – Edward (Ed) Ledoux, 89, was born and raised in Marlboro, MA, where he died peacefully at home surrounded by loved ones on Thursday, January 13, 2022.

He was the son of the late E. Leo and Anna (Tambling) Ledoux and husband of the late Anne (Gould) Ledoux who died in 2019 and was predeceased by his daughter Amy Ledoux and daughter-in-law Wanda Forcier.  He is survived by daughters Christine Ledoux of Cambridge, MA, Robin and Joseph (Forte) of Edgartown, MA, Julie Ledoux of Southside, AL and son Edward Jr. and his wife Lisa of Berlin, MA.

Ed was known by all as the friendly and social guy with a memorable handlebar mustache.  He attended Marlboro High School and Hillyer College while selling Ramblers at Vigeant Motors in Marlboro, and eventually built a successful career in the Fire Protection industry.

Ed was proud of his early work with NASA and the U.S. Atomic Energy Agency, but his longstanding legacy was as a leader and mentor to generations who built successful careers in the fire alarm industry. His creative solutions to the applications, engineering, and the installation of fire alarm systems are ingrained in the industry to this day.

Ed enjoyed golf, but was more proficient as a wood craftsman, making miniature, historically accurate furniture and dollhouses, and restoring antique homes. He was always busy with multiple projects for other people. In his later years, he developed an interest in cooking and frequently hosted ambitious dinner parties and large gatherings. He especially loved to celebrate Thanksgiving.

Most importantly, Ed (Pepere) was proud of his family. His devotion to his wife Anne was legendary. For 68 years they enjoyed many travels and adventures and lived in Hudson, MA, California, and Florida, as well as Marlboro. Together they raised five children and adored their grandchildren, Corinna, Jessalyn, Lizzie, Eddie, Lianne, Lindsay and Logan, and his great grandchildren Skyler, Gryffin, Beatrix, Hazel, and Zephyr. An extensive group of treasured people were also welcomed as part of the family.  He will be sorely missed by all.

Out of safety and respect for all, the family requests that Covid protocols be followed, and masks be worn by all visitors.