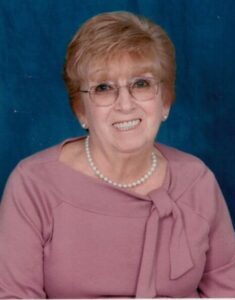 Marlborough – Doris M. Maffioli, 90, of Marlborough, died at her home surrounded by her loving family on Thursday, February 10, 2022.

She was born in Watertown, MA, the daughter of the late Frank J. and Matilda (Crescitelli) Natale.

Doris was predeceased by her husband of 54 years, Angelo J. Maffioli who died in 2003.

Doris worked for Marlboro Footwear for 18 years as a Bookkeeper and Office Manager, making many lifelong friends. When the shoe industry moved out of Marlboro, she worked for the Longden Co. for many years. She enjoyed line dancing for over 20 years. She loved bowling in Candle Pin and Ten Pin Leagues in Marlboro and held many offices in both leagues. One of her memorable moments was winning a trip to Bermuda from bowling a 600 series in Ten Pin. She belonged to St. Ann’s Church in Marlboro and was on the Parish Council, and a Lector and Eucharistic Minister for many years before it was closed.

She also enjoyed making fried dough at the Church Festival and spending time with family and friends.

In addition to her husband, she was predeceased by her daughter and son in law Donna and David Estabrook; sister, Shirley Soave and her husband Harry; 2 brothers, Frank Natale Jr. and his wife Kay.

The family would like to give special thanks to the Kindred Hospice team for all their loving care.

In lieu of flowers, memorial donations may be made in Doris’ name to the Jimmy Fund, 10 Brookline Place West, 6th Floor, Brookline, MA 02445.