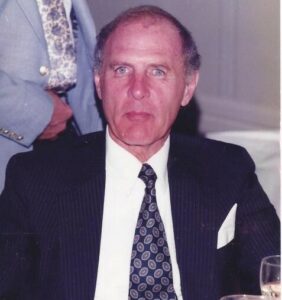 Hudson – Robert “Bob” Anthony Rocheleau, a talented athlete and beloved family man, passed on February 12th, 2022 at his home in Hudson, Massachusetts. He was 90 years old when he died of Alzheimer’s. Bob was loved by all for his generosity, kindness, and laid-back nature; he was well-read and practiced in the art of spiritual living.

Bob met Velma Moura, the love of his life, at Hudson High School. They married in 1952 while he was on leave from his four-year stint in the Navy. He leaves his three children (and spouses) Ann Marie Rocheleau and Michael Kelley of Hopkinton, Sandra (Rocheleau) and Philip Crear of North Attleboro, and Robert Rocheleau, Jr. and Amy (Spencer) Rocheleau of Petersham. He cherished his seven grandchildren: Caitlin Kelley, Paul Kelley, Daniel Crear, Justin Crear (and his wife Kate), Jacob Crear, Jasmine Rocheleau and Elijah Rocheleau. Bob was especially delighted by his only great-grandson Luca Crear. Robert was the son of the late Harold and Elise (Charbonneau) Rocheleau. He is predeceased by his brothers Harold, Richard, Paul, and James. He is survived by his sister Mary (Rocheleau) Hammond of Marlboro and many nieces and nephews who love him dearly.

After graduation in1950, Bob entered the Navy where he was an electrician on a transport ship. Once honorably discharged, he worked at Raytheon and then at Hudson Lock. Eventually, he became a postal worker for the U.S. Postal Service in Stow. Bob and Velma moved from Marlboro back to Hudson three decades ago. He served as President of the Meadowbrook Mobile Home Association from 2005-2006. In the park Bob could be seen cross-country skiing, roller-blading, or chatting with his neighbors. He was often found tending to his gardens where he grew blueberries, raspberries, flowers, and even some weeds that he deemed pretty. Bob always lit up the dance floor with his wife Velma. He will be dearly missed by all.

Bob was active in sports throughout his life. At Hudson High School, where his friends called him “Rocco,” he lettered in football, baseball, and hockey. Off the field, he served as class president. He continued to play hockey throughout his life and also coached and refereed youth hockey. His hockey career peaked during the early 2000s when he played with the legendary over 70 Rusty Blades; Bob and Velma traveled near and far for hockey tournaments. The Rusty Blades won a national hockey title and a number of medals in the Senior Olympics. Bob and Velma also traveled with their good friends Vic and Rosemary Rimkus for Senior Olympics tennis. Bob and Vic won several Gold and Silver medals in doubles and Bob also won Bronze in singles. Once Bob retired from sports, he reveled in watching his grandchildren play soccer, hockey and track at the high school and college level. In fact, Bob and Velma could be seen attending many athletic events in Hudson, for which they were the recipients of the “Fan Appreciation Award” in 2005 by the Hudson High School Athletic Association.

Bob passed in peace surrounded by his loving family. A period of visitation will be held from 4-7pm on Wednesday, February 16, 2022 at Tighe Hamilton Regional Funeral Home, 50 Central St., Hudson, MA. A Funeral Service will be held the following day, on Thursday, February 17, 2022, at 1pm in the funeral home. Burial will be private at a later date.