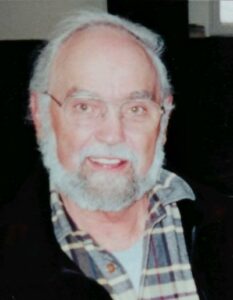 Bellingham – Charles F. Harrison, 86, of Bellingham and formerly of VT and Southborough, passed away on Wednesday evening, April 27, 2022, as a result of an illness at Milford Regional Medical Center. He was the beloved husband of Barbara (Borelli) Harrison for the past 65 years.

Born in Leicester to the late Bernard and Marie(Johnson) Harrison and was their second child. Charlie spent his early years in Leicester, before moving to Acton, where he graduated from Acton High School. One of his proudest accomplishments was building his wife and children their first home in Southborough, where they lived for 24 years.

He was an avid outdoorsman his entire life, spending many joyful hours hunting and fishing and spent a number of years training hunting beagles.

Charlie loved all things Boston sports and also dedicated his time coaching pop warner football and little league baseball. He was a member of a bowling league team as well.

An accomplished builder and tradesman, Charlie spent many years as a union carpenter before moving to Vermont and starting his own construction company called Harrison Homes. He was everyone’s “phone a friend” when it came to home improvement and DIY projects. He loved to share his knowledge and be able to help out.

He lived in Vermont for 28 years before moving back to Massachusetts in 2012. A man with a serious sweet tooth, Charlie loved his daily ice cream and tic tacs, which were always on hand no matter the time of day.

In addition to his wife, he is survived by his daughter, Joanne (Harrison) Keenan and her husband Bill; his brother, Bernard ‘Wally’ Harrison; his grandchildren, Jenny Harrison, Kate Harrison, Emily (Harrison) Jaquez, Luke Harrison, Jenna Keenan, Ryan Keenan, and Amanda (Wilson) Speier; and his great-grandchildren Jasmine Flowers and Cassius Jaquez.

He is predeceased by his daughter, Deborah (Harrison) Wilson; his son and daughter-in-law, Chuck and Debra (Grout) Harrison; his sister, Marion McKelvie, and his brother, William Harrison.

All services will be private and burial will be in the Southborough Rural Cemetery.

Arrangements are under the care of the Morris Funeral Home, 40 Main Street, Southborough. To leave words of condolence to the family, please visit www.morrisSouthboroughfuneral.com.