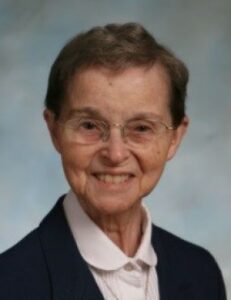 Marlborough – Sr. Jeanne Arsenault was originally from Mexico, Maine, the daughter of Andrew and Alma (Quirion) Arsenault. She was the fourth of five children in this close-knit loving family.

The Arsenaults were devout Catholics, and Jeanne attended St. Theresa’s Parochial School with the Sisters of St. Chretienne as her teachers.  Quite young, she realized she wanted to be a Sister like them. Her high school years were spent at St. Chretienne Academy in Salem MA in the Juniorate program for girls considering a vocation with the Sisters. After graduating, Jeanne entered the Novitiate in Giffard, Quebec, pronouncing her first vows on August 15, 1955.

For the next 35 years, Jeanne taught children in the primary grades of parish schools in Amesbury and Salem MA, and then back in Mexico and Rumford. She was tiny in stature but full of love for her students. She loved to speak to them about Jesus and to prepare them for their First Communion. She also instilled in them her love of music. She had learned to play the guitar and the autoharp.

In 1991, the Sisters reluctantly left St. John’s School in Rumford due to aging and lack of vocations. Two years later as Jeanne’s parents were also aging and her elderly Aunt Jackie was in need of care, Jeanne was missioned to help them. This became a precious time for her.  She took a course to become a “Helping Hands PCA/Homemaker.” She joined the choir at St. Theresa’s and was a Eucharistic minister for homebound parishioners. She also became a Hospice volunteer. Her love of music led Jeanne to join the chorus of RAAPA (Rumford Association for the Advancement of the Performing Arts). Whenever she spoke of this experience, Jeanne literally glowed.

In 1999, after her dad died, Jeanne came to live in the Sisters’ retirement community in Marlboro MA. There she served as a nurse’s aide and went to the Sisters’ preschool to teach music to the little ones. She became known as “singing Sister Jeanne” with her mysterious autoharp adding to her charm. Jeanne would also lead a monthly Communion service for the residents of the local nursing home. In conjunction with the Activity Director at the Sisters’ residence, Jeanne started a bell choir. Their concerts were cherished events as Jeanne excelled at directing and bringing out the best in her group’s abilities. Sr. Jeanne was very spiritual and loved participating in the Sisters’ Bible study group. She was so tiny, but had such a large spirit, and an unending kindness and attentiveness to the needs of those around her.

Sr. Jeanne moved to the Health Center last year with the community relocating there. Despite her declining health, the excellent care from the staff helped her greatly. She was loved by all, and her recent death is a great loss to her Sisters, the staff and residents. She lived Jesus’ Gospel of love, and now will enjoy God’s unending reward.