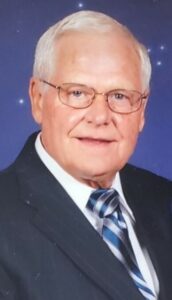 Southborough – Ronald Lee DeHart passed away peacefully at home in Southborough, MA, on July 9, 2022 surrounded by his loving family.

Ron was born on May 4th, 1938, in Tarkio, Missouri, where he was raised.  He joined the US Air Force when he was 18 years old, and served in England, where he met and married Patricia Sambrook, the mother of his five children. After he and Patricia divorced, he met Sue, who shared his life for 38 years.

After leaving his 4-year stint with the US Air Force, he went on to a career as a field service engineer and eventually manager with Honeywell Computer Systems and took early retirement in 2001 after working in both the United States and England.  While working at Honeywell, he joined the Air National Guard from which he retired after 20 years of service with the Air Force.

He kept more than busy after retiring, going back to his earlier career as a bricklayer, managing his various rental properties, traveling the world, and finding projects to work on around his houses. He also very willing offered his help to his neighbors for their home projects. He took up cross country skiing and snow shoeing and valued his time at his second home in Vermont.

Ron led a busy and adventurous life, professionally, militarily, and personally. He and Sue had a great love for traveling and took so many wonderful trips together. By the end of his life, Ron had been in all 50 states, 60 countries, and 6 continents. He dove the Great Barrier Reef and Bonaire, and at the age of 70, while in Tanzania, he climbed Mt. Kilimanjaro. He and Sue were able to spend the few months prior to his passing traveling to Costa Rica, Portugal, and Iowa, where they attended a family reunion that he was particularly looking forward to.

Ron is survived by his devoted wife, Susan Porada; his children, Valerie Baker (Jeff), Van DeHart (Cindi), Vincent DeHart (Tamayco), Ronald DeHart (Dawn) and Vanessa Williams (Jason).  He also leaves behind his loving grandchildren, Jakin, Madison, Cole, Carson, Dane, Christina, Olivia and Stephanie, and one great grandson, Vincent.  Also, his sisters, Karen Huff and Jeannie Moeckl along with her husband, Dan and many nieces and nephews. He made many strong and lasting relationships over the years and will be fondly remembered and missed by his dear friends and neighbors. Ron is preceded in death by his parents, Vincent and Doloris DeHart; his sister, Carol Renae, and ex-wife, Patricia.

Funeral Services will be held at 10:00 a.m. Monday, July 18 at Roberson Funeral Home, Bethany, MO. Burial with Military Rites will follow in Lone Star Cemetery, Denver, MO. The family will receive friends from 9:00-10:00 a.m. Monday at the funeral home.

In lieu of flowers, the family requests memorial donations be made to a favorite charity in memory of Ron in care of Roberson Funeral Home, P.O. Box 46, Bethany, MO 64424.

Online condolences may be left at www.robersonfuneralhome.com.