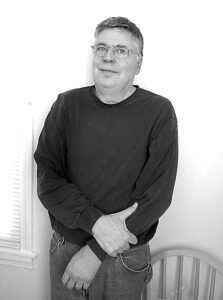 What can your business do?

“I convert older forms of media such as camcorder tape and film reels into new digital formats such as DVDs and CDs. I can convert all formats. If I can’t convert it, you don’t have it.”

“Today, people like to put their programs on hard drives, and I can do that as well.”

“We specialize in family camcorder videos.”

How did you get started?

“I’ve always been fascinated with music. As a teenager, I took tape recorders apart and reassembled them because I was interested in their ability to record sound. One thing led to another, and I moved with the times through all the technologies that have followed.”

What kinds of media do you work with?

“All those video formats that came and went, that people don’t have the cameras and equipment to watch anymore. People even bring old reel-to-reel audio tapes. One man had tapes of his father, a jazz musician in the ‘60s, and I converted them to CDs so he could listen to them.”

“An exception is 35-mm slides. People should preserve their slides, put them in zipper plastic bags and squeeze the air out. The images on slides are higher quality than converted images will be. I can put slides on a DVD for convenient viewing or to share.”

Why convert this material?

“It’s a good idea to convert tape and film to current formats to preserve the content as well as to be able to view and hear it on today’s equipment. Any kind of tape and film will deteriorate over time.

“People overestimate how long media will last. We expect DVDs to last about 25 to 30 years.  No one knows for sure. But if you do your part today, your children and grandchildren can transfer the programs to the next form of media.”

“Future generations will be able to watch their great grandparents in color and sound. We can’t do that because our ancestors didn’t have the technology, but a couple of hundred years from now, families will be able to look back. A colleague had a daguerreotype of his great grandmother that we compared to a picture of his daughter about the same age. The resemblance, four or five generations apart, was remarkable.”

Does conversion damage the originals?

“Normally, no. If the film or tape is in fair to good shape, we can hand back the original exactly as we got it. There was one case where the film was in such bad shape it disintegrated when it came out of the projector, but we had captured the images, and actually saved the program.”

How does someone get started?

“Call or email me. I will pick up the material or you can bring it to me. I don’t recommend mailing or shipping the material because, if it gets lost or damaged, it’s irreplaceable. If it’s a sound recording, I convert it to a CD; if it’s video, I convert it to DVD, or I can put anything on a hard drive.”

“DVDs make great gifts, and Christmastime is a good time to look at them when the family is together.”

Northboro Media Service works by appointment. For more information them at 508-393-9440.

Note by Jeff: Future generations will be able to watch their great grandparents in color and sound. We can’t do that because our ancestors didn’t have the technology, but a couple of hundred years from now, families will be able to look back.