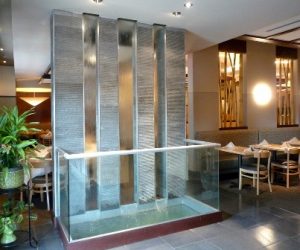 Westborough – What a difference a couple of miles makes.

The Mandarin has been satisfying Westborough's cravings for Chinese food for over 15 years in its restaurant on East Main Street. But this summer, that location closed and the Mandarin has moved to sumptuous new quarters in the Westborough Shopping Center, right at the intersection of Route 9 and Lyman Street.

The restaurant's parent company, which operates six other Asian restaurants in the Boston suburbs, has completely remodeled the location, which had been home to Boston Market's Rotisserie Grill.

Along with the ambitious makeover, the Mandarin has added a sushi bar and the ability to offer Japanese shabu shabu dinners, thinly sliced meats and vegetables cooked at the table in a hot broth bubbling in a pot on an induction cooktop.

The Mandarin continues its popular lunch buffet, $9.85 on weekdays and $11.85 Saturdays and Sundays, and has added a Sunday night dinner buffet for $17.50 that includes soup, appetizers, dim sum, sushi, entrees, fresh fruit and desserts.

Jeff Huang, general manager of the Westborough location, said the company moved when the Main Street lease expired because the new location on Route 9 offers higher visibility and is a little larger, seating about 170.

Since the new restaurant opened Aug. 30, “we'se been much busier than we were” at the former spot, he said. “We'se seen a lot of our regulars plus a large number of new faces.”

The new Mandarin combines some décor features from both the Mandarin and Bamboo restaurants operated by the parent company.

An elegant and soothing stylized ceiling-to-floor waterfall accents the reception area and immediately sets the mood for a relaxed dining experience.

The entire dining space has been artfully divided into several spaces separated by partial walls inset with faux bamboo “windows.” This arrangement creates a sense of privacy and cuts down on the noise in the restaurant. The color palette is subdued with shades of cream, gold, taupe and dark and medium wood tones.

As you enter the Mandarin, a new bar and lounge area is to the right, with both bar seating and tables if you wish to dine there, in view of the hottest sports action on the wide-screen television over the bar. During warmer weather, customers can also enjoy a small outdoor patio.

In the main dining area, there's a sushi bar where diners can sit and watch the sushi chefs work their magic, and there are also tables in the sushi bar section.

At the rear of the next section is the buffet serving area, with a large double-sided serving line for hot entrees that can hold up to about 18 different dishes. Turn around and there's a serving station for cold items, including sushi, salads, fruits, dessert and a side variety of condiments.

In yet another section are the tables with induction cooktops similar to those on a glass-topped home stove. The cooktops heat the pots of broth for shabu shabu but don's get hot themselves, so diners can's be burnt by the cooktops. If you want to sample this Japanese specialty that's akin to fondue cooking, it's a good idea to call ahead and reserve one of the special tables necessary.

Shabu shabu and the extensive sushi menu are the Mandarin's major additions to its menu, which was almost exclusively Chinese cuisines at the former location. The sushi menu includes sushi entrees, nigiri sushi on ice, sashimi and two dozen versions of sushi rolls.

The Chinese menu features a wide variety of poultry, pork, beef, seafood, vegetable, rice and noodle dishes, including Beijing duck. Among the new entrees are crispy pad Thai and crystal scallops with peapods, carrots and mushrooms. Most entrees range from $8.95 to $13.95. Lunch specials, apart from the buffet, are $7.50 to $9.50 for Chinese dishes, and $9.95 to $12.50 for Japanese dishes.

Appetizers include both Chinese and Japanese favorites such as egg rolls, spareribs, Beijing ravioli, edamame, tempura and gyoza.

Almost the entire menu, including sushi but excluding shabu shabu, is available for takeout.

The new Mandarin restaurant is located at 132 Turnpike Rd. (Route 9) in the Westborough Shopping Center. It's open Sunday through Thursday from 11:30 a.m. to 9:45 p.m., and Friday and Saturday from 11:30 a.m. to 10:45 p.m. For reservations and takeout orders, call 508-366-2288. The parent company's website, www.mandarincuisines.com, has a link to the Westborough location; Huang expects the link to be operating by early October.