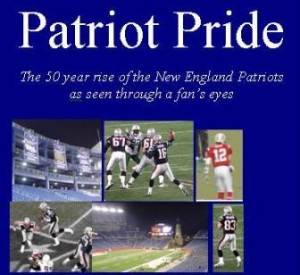 Westborough – The Westborough Public Library will present local author Vin Femia Wednesday, Nov. 2, at 7 p.m., to talk about his new book, “Patriot Pride: The 50 Year Rise of the New England Patriots as Seen Through a Fan's Eyes.”

The book provides a decade-by-decade summary of the sometimes turbulent and recently dominant history of the New England Patriots from the formation of the American Football League in the 1960s; through the development of a strong, title-contending team and the near-misses of the 1970s; the ups and downs and the initial Super Bowl trips in the 1980s and 1990s; and the great successes that the team achieved in the Super Bowl wins and perfect regular season in the era from 2001 to the present. Also included are in-depth interviews with 16 key players and contributors to Patriots” and NFL history.

Vin Femia is a graduate of Holy Cross and also the author of “The Possible Dream.” Copies of “Patriot Pride” will be available for purchase and signing. Femia will donate a portion of the proceeds to two charities: the ALS Association, which helps patients who have been stricken with Lou Gehrig's disease, and IMEC, a non-profit organization whose mission is to provide quality medical equipment to health care facilities aiding the poor in developing countries.