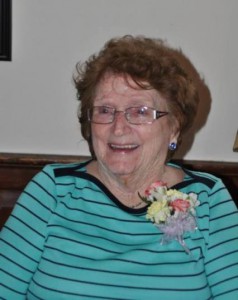 Hudson – Edith G. “Edie” (Bryson) Johnston, 90, of Hudson, formerly of Marlborough and Waltham, died Sunday, Jan. 11, 2015 at Sudbury Pines Extended Care in Sudbury. She was the beloved wife of 59 years to the late George E. Johnston Jr., who died in September 2000.

Edie was born and raised in Newton, daughter of the late William and Margaret (Durno) Bryson. She resided in Waltham for many years and was a longtime resident of Marlborough. Prior to Sudbury Pines, she lived in Hudson for eight years.

Edie took great pride in the care of her home and raising her children along with her husband, George Jr. She later worked at Bartlett’s Greenhouses in Sudbury and always cherished the friends and acquaintances she made while there.

Edie was always happiest when she was with her family, and especially enjoyed holidays and social gatherings that brought them all together. She looked forward to their yearly family vacations in North Truro on Cape Cod as they shared many treasured memories. She was a loving and devoted wife, loving mother, grandmother, and great-grandmother and will be truly missed.