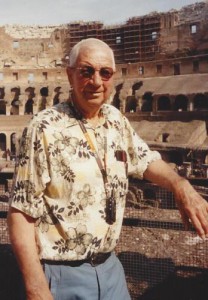 Marlborough – George D. “Danny” Russell Jr., 79, of Marlborough, died Sunday, May 17, 2015 at Marlborough Hospital. He is survived by his wife of 55 years, Barbara A. (Mullahy) Russell of Marlborough.

George was born and raised in Allston, son of the late George D. Russell Sr. and Santina G. (Midi) Russell. He attended local schools and was a 1953 graduate of Brighton High School. He served in the Massachusetts National Guard and worked as a truck driver with the Local 170 and Local 25 Teamsters Union transporting and assisting in movie productions locally. He also along with his wife Barbara have owned and operated Main Street Antiques in Hudson the past 25 years. He was a member of Saint Michael’s Parish in Hudson.

George was a longtime volunteer and coach in both the Marlborough Youth Hockey and Baseball programs in the 1960s and 1970s. He enjoyed traveling and always looked forward to spending the summer months at their cottage in Hampton Beach, N.H. Most of all, he cherished the times he shared with his family, especially with his loving grandchildren.

Besides his wife, he is survived by his three children, Robert Russell of Marlborough, Brian Russell of Hudson, and Mary Teixeira and her husband George of Hudson. He is also survived by his sister, Sandra O’Connor of Watertown; his brother, Thomas Russell and his wife Jeannie of Hopedale; and his seven grandchildren, Alyssa, Robert, Tina and John Russell, Matt, Joshua and Chris Teixeira, along with many nieces and nephews.

A funeral Mass will be celebrated Thursday, May 21, at 9 a.m., in Saint Michael’s Church, 21 Manning St., Hudson. Burial will follow in Forestvale Cemetery, Hudson. Family and friends may attend calling hours Wednesday, May 20, from 5-8 p.m., at theTighe-Hamilton Funeral Home, 50 Central St., Hudson.

In lieu of flowers, donations in memory of George may be made to RCS (Realizing Children’s Strengths), 6 Strathmore Rd., Natick, MA 01760.