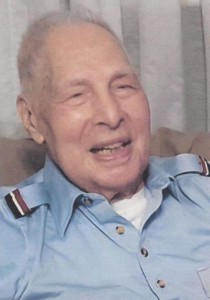 Sunrise, Fla. – James Poulos, 95, of Sunrise, Fla., formerly a longtime resident of Hudson, passed away Monday, Jan. 11, 2016 after a short period of declining health. He was the beloved husband of the late Vivian (Whitelock) Poulos, who passed away in 1972.

Jim was born Sept. 30, 1920 in Brighton. He attended the Henry Ford School in Sudbury. After graduation, he joined the U.S. Army and served our country in WWII, earning many decorations and citations, including the Purple Heart. He was honorably discharged in December 1945.

Jim worked at Lapointe’s Machine Shop in Hudson for many years and later for the Hudson Broach Co. until his retirement. He was a Life Member of both the Hudson and Ft. Lauderdale Lodge of Elks.

Jim was an avid fan of all sports, including horse racing. He was known to have wagered a few dollars on a few “nags.” He enjoyed his annual visits up North to spend time with his son, family, and his longtime Hudson friends.

He is survived by his son, Bruce and his wife Charlene, and his loving granddaughter, Emily of Worcester. He also leaves a special friend, Robin Errede of Shrewsbury, who together shared the honor of being Best Man and Matron of Honor at his son’s wedding. He very recently lost his sweetheart of 33 years, Margaret “Marge” Cunningham of Sunrise, Fla., leaving behind Marge’s caring daughters, Margie, Terri and Robin, and their families.

We will miss his kind, gentle, and generous demeanor and love him forever.

At his request, funeral services will be held privately. Services are under the direction of Tighe-Hamilton Funeral Home of Hudson.