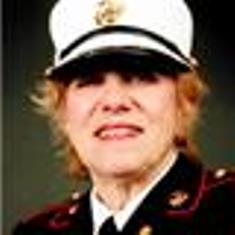 Southborough – Irene B. Tibert, 81, of Southborough, passed away peacefully in the presence of her family Thursday, April 21, 2016. She was the wife of Richard F. Tibert.

Irene was born in 1934 to Dominick and Chiara Dominianni in Brooklyn, N.Y. After graduating from James Madison High School, she enlisted in the U.S. Marine Corps and served during the Korean War. Upon discharge, she continued to serve with the National Guard.

In her earlier days, she and her former husband, Bill Burkis, operated a small landscaping and maintenance business. She was employed for a while at Algonquin Regional High School in the multi-media department. She worked 10 years for the U.S. Postal Service in Marlborough.

Being the patriotic and devoted person that she was, she worked 33 years as Southborough’s Veterans Agent, and proudly wore her dress blues at patriotic and military events and ceremonies. She was also much involved in the establishment of WIMSA, the Women In Military Service for America Memorial in Washington, D.C. Her name and short audio bio is recorded there.

Irene took various courses of study at Framingham State College and gradually developed a passion for American history. She was especially intrigued by, as she would put it, the “First Ladies and their husbands.” She loved ballet, and for a short time she taught youngsters in her home. She enjoyed her travels to Europe, and most especially to Italy, her land of heritage. She enjoyed sailing aboard the historic windjammers in Penobscot Bay and along the Maine coast. She liked to keep active as possible with traditional jazz, museums, live theater and tasteful movies.

A private family service with military honors will be held at the First United Methodist Church in Westborough.

In lieu of flowers, donations in her memory may be made to Straight Ahead Ministries, 791 Main St., Worcester, MA 01610.