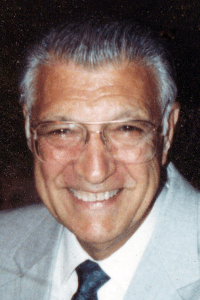 Hudson – Mario Joseph Barreira, 95, a lifelong resident of Hudson, passed away peacefully, surrounded by his loving family, at the Ledgewood Rehabilitation and Skilled Nursing Center in Beverly. He leaves his beloved wife of 68 years, Dorothy Marie (Curley) Barreira.

Mario was born and raised in Hudson, son of the late Elpidio and Alzira (Ferreira) Barreira. He attended local schools and was a 1940 graduate of Hudson High School. He served as the class treasurer and was a member of the football, baseball and captain of the basketball team at Hudson High School.

He was a proud veteran of WWII, serving in the U.S. Navy in the European Theatre, and was part of the Sicily and Normandy Invasions until being honorably discharged in 1945.

He was employed as a foreman for many years by the Commonwealth Gas Co., currently known as the Eversource Co., working out of their Southborough location until his retirement in 1986.

Besides his wife, he is survived by his children, Thomas Barreira and his wife Melody of Los Altos, Calif., Dorothy Breault and her husband Norman “Chip” of North Hampton, N.H., James Barreira and his wife Linda of Windham, N.H., Linda Cleveland and her husband Douglas of Sudbury, and Christine Barreira and her partner John Liptak of Marblehead. He is also survived by his seven grandchildren, Alexander Barreira, Allison Barreira, Joshua Breault and his wife Lesli, Zachary Breault, Steven Barreira, Nicholas Barreira, and Lindsay Cleveland; his two great-grandchildren, Rowan and Elliana Breault; and many nieces and nephews. He was the brother of the late Urbino Barreira of Holliston, Mary Ricciuti of Marlborough, and Joseph G. Barreira of Hudson, and is survived by Joseph’s wife, Shirley Barreira of Cape Cod.

Mario truly lived a long and enjoyable life surrounded by his loving family until his passing. He always cherished gathering with the family, especially later with his grandchildren and great-grandchildren. He was an avid Red Sox fan and truly enjoyed attending the World Series in 2013.

In his spare time, he enjoyed tinkering around his home and playing cards with family and friends. The memories of a devoted husband, a “Great Dad,” and loving grandfather and great-grandfather will be cherished forever by all his loving family.

In lieu of flowers, donations in memory of Mario may be made to Saint Vincent De Paul, c/o Saint Michael’s Parish, 20 High St., Hudson, MA 01749.