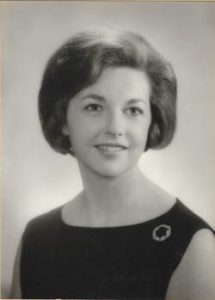 Shrewsbury – Rosemary (Breen) Rennie, 78, of Shrewsbury, passed away Monday, Oct. 17, 2016. She was surrounded by her loving husband, Wayne, and her beloved daughter, Ellen.

Rosemary was born July 7, 1938 in Fitchburg.  She grew up in Shrewsbury and went on to attend the University of Vermont. She was a member of the Tri Delta Sorority and was the Chief Justice of the Women’s Supreme Court as an undergraduate. Rosemary was the recipient of the Mary Jean Simpson Woman of the Year Award in 1960. This award was given to the senior woman who best exemplified the qualities of character, leadership and scholarship.

She graduated with a Bachelor’s of Arts from the University of Vermont and went on to begin graduate coursework at Boston University. Rosemary then had the opportunity to teach for the Department of Defense in Landstuhl, Germany, where in 1964 she met the love of her life, Wayne M. Rennie, who a captain in the United States Army. They were married July 9, 1966 in Shrewsbury.

Rosemary taught for 12 years, touching the lives of elementary children in Shrewsbury; Landstuhl, Germany; and Alexandria, Va. On Aug. 16, 1972, Wayne and Rosemary gave birth to their daughter, Ellen Collins Rennie.

Throughout her life, Rosemary was actively involved in the communities in which she lived. She was a member of the Board of Trustees for the Shrewsbury Public Library for 15 years and served as chairman for three years. Prior to that, she was chairman of the Arts Commission in Shrewsbury, which promoted culture and arts in town. She was a volunteer docent at the Worcester Art Museum for many years. She was also Girl Scout leader in Shrewsbury, as well.

Rosemary loved to read, knit, work in her yard, listen to music, and spend time with her family and friends. She loved to listen to NPR and was always ready to share her viewpoint. She touched many lives and will be missed terribly.

There will be a celebration of her life scheduled at a later date.

Mercadante Funeral Home & Chapel of Worcester is honored to be assisting the family with arrangements.

To share your thoughts and memories of Rosemary, visit her personal guestbook at www.mercadantefuneral.com.