Shrewsbury – Bob Heske of Shrewsbury credits his late mother for inspiring him to pursue his dream of completing a full-length screenplay. He wrote and produced the award-winning drama “Blessid,” which is now available on Amazon Prime and Vimeo on Demand.

In 2011, Heske began writing the story of the bonding between two neighbors: a 2,000-year-old immortal man and a depressed pregnant woman. At the time, his mother was in a nursing home with Alzheimer’s disease and didn’t recognize him. The family was surprised when his father brought her a clock with Heske’s photo on it.

“I bought a cheap plastic clock with a picture of me on it for my mom back when I was about 30,” he explained. “Dad called me and said, ‘Your mom recognized you.’ She pointed at my picture and said, ‘That’s Robert.’ It was an inspiration that she recognized me for a moment. That motivated me to complete writing the script.”

Heske had experienced writer’s block while in search of a visual metaphor to begin and end the film. He decided to incorporate images of the photo clock that he gave his mother.

“It’s the visual metaphor that I needed and it also gave me the push to move forward,” he said. “Making a film when you’re mostly self-funded is costly and scary. There’s a lot of uncertainty, especially if you’ve never done it before.”

Filming began when he turned age 50. Acknowledging that he’s an introvert by nature, Heske suddenly found himself constantly surrounded by actors and crew members. He learned life lessons including how to get out of his comfort zone.

“If you’re comfortable at every stage of your life, then you haven’t really taken any chances,” he said. “For some people, it’s training for a marathon or climbing a mountain. For me, it was making a film, rather than being at my computer writing. There’s tons of steps in the filmmaking process. It’s really hard when you have a fulltime job and a family to support.”

“It puts a lot of angst on your family, and wear and tear on your house,” he said. “For part of the time we were filming, I had to have my wife and two daughters stay at a motel.”

In 2014, the trailer for “Blessid” debuted at the New England Music Awards at the Lowell Memorial Auditorium. Nominated for Song of the Year was “Shiver” sung by Sarah Blacker, which plays over the film’s final credits. Joining Heske at the ceremony to present the award for Producer of the Year were Rob Fitz, director; Rachel Kerbs, lead actress; and Rick Montgomery Jr., lead actor. 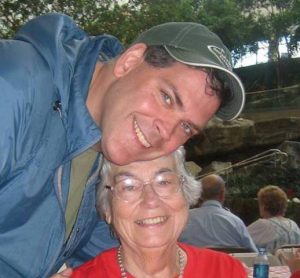 “Blessid” premiered February 2015 during the 40th annual Boston Science Fiction Film Festival at the Somerville Theatre in Davis Square. For the first time in its four-decade history, the iconic festival introduced the Best Local Film award and presented it to “Blessid.”

Several other screenings and honors followed, most notably the Buffalo Niagara Film Festival in 2015. There, “Blessid” captured Best Picture, Best Director, Best Cinematography and Best Actor for Rick Montgomery Jr. In 2011, Montgomery retired from a business career to pursue acting.

Now, Heske is working on a documentary titled “Afraid of Nothing” about life and the afterlife seen through a paranormal lens. He’s grateful to continue his second career as a filmmaker.

“When I was visiting my mother in the nursing home, I realized that in 25 years it could be me in there with Alzheimer’s,” Heske shared. “I decided at that point to go for it and she probably would want me to do that. She was always my biggest supporter.”

He dedicated “Blessid” to his mother Carlotta Maria Heske.