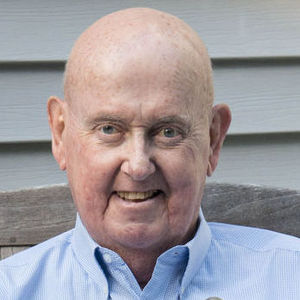 Shrewsbury – Standing at 6’5″, Sean McCue’s affable personality was even bigger. Outgoing and engaging, he was a friendly guy who somehow seemed to know everyone. Sean died peacefully at home Saturday, Feb. 11, 2017 in the company of his family. He was 71.

Born June 23, 1945 in Worcester, he was the son of the late Arthur and Mabel (Loughlin) McCue. Raised in the main south neighborhood, his church was St. Peter’s and he went to school there for 12 years, during which time he met his future wife, Ruth L. Stimets. He graduated from St. Peter’s in 1964 and then graduated from Mass Military Academy in Boston and served in the National Guard. On Oct. 26, 1968, he married Ruth in St. Peter’s Church.

Sean’s employment with the former Jamesbury Corporation, now Metso, took them to Texas in 1969 where they lived in the Houston area before a much desired return home to Massachusetts in 1980, when they settled in Shrewsbury. He was a much-revered employee at Jamesbury and worked as regional sales manager for many years, retiring in 2003 with over 38 years of service.

Retirement afforded Sean more time on the golf courses at Pleasant Valley Country Club, Wachusett Country Club, and Cummaquid Gold Club in Yarmouthport. Aside from his physical presence, you knew he was on the course because his not so subtle golf attire made him a standout. He loved it. Annual golf trips with his buddies in January was a priority on the calendar.

Tip O’Neil said, “always remember where you came from” and Sean McCue did for certain. Saint Peter’s remained his church throughout his life and he loved the company of familiar faces at Breen’s Café and the Wexford. He served on the board of Adopt-A-Student in Worcester. Ireland, Scotland, and Florida were amongst his favorite places to visit and a golf tournament win in Scotland was a major highlight. Spending time with his friends and family at his summer home on the Cape in Dennisport was heaven on earth.

May the doctors, nurses and staff forever know the gifts they have given Sean and his family during his care at Dana-Farber in Boston. His family remains indebted to them for their expertise, kindness, and guidance.

In addition to his wife of 48 years, Ruth, he leaves their children, Melissa M. Noroian and her husband Gary of Worcester, Kellyann McCue and her husband Ned Kitfield of Portsmouth, N.H., and Elizabeth M. Zekus and her husband Michael of Worcester; his grandchildren, Katherine and Gregory Noroian; in-laws Sally Franchi, Frank and Betty Joubert and John and Karen Stimets; and many nieces and nephews. He was predeceased by his sister, Martha Peterson.

Family and friends will honor and remember Sean’s life by gathering for calling hours Thursday, Feb. 16, from 5-8 p.m., at Heald & Chiampa Funeral Directors ~ The Sumner House, 5 Church Road, On the Common, Shrewsbury Center, and again Friday morning before leaving in procession to Saint Peter’s Church, 929 Main St., Worcester, where his funeral Mass will be celebrated at 10 a.m. Burial will follow in Saint John’s Cemetery.