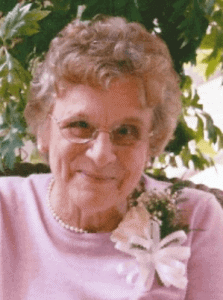 Hudson – Pauline Lucille (Truchon) Dyer, 93, of Hudson, passed away Sunday, April 23, 2017, surrounded by her children, at the Elizabeth Seton Residence in Wellesley Hills.

She was born June 5, 1923 in Laconia, N.H., the daughter of Albert and Louisa (Bernier) Truchon. She married Victor E. Dyer of Dover-Foxcroft, Maine in 1941 and they were married for 64 years. They moved to Hudson from Waltham in 1958.

They were the owners and proprietors of Boyce Hallmark Cards on Wood Square and Hudson Realty Company. Pauline worked for many years at the Salt Box Country Store in Bolton.

She is survived by her children, Aurelie Dyer Wallach and husband John of Biddeford, Maine, Victor Eugene Dyer II of Hamilton, and Mark G. Dyer and wife Lynne of Sangerville, Maine, as well as many grandchildren, great-grandchildren, nephews, and nieces.

Pauline was a member of the Catholic Daughters of America for her entire adult life. She was a devoted wife and mother who maintained an abiding interest in her extended family.

Before her health declined she enjoyed cruises and travel, as well as visits to her stone camp in Maine. She had many close friends in Hudson where she lived for almost 50 years. In 2007, when she sold the house her husband built on Chapin Road in Hudson, she moved to New Horizons in Marlborough, where she made many new friends.

Visiting hours are Friday, April 28, from 4-6 p.m., at the Tighe-Hamilton Funeral Home, 50 Central St., Hudson. Her funeral Mass will be celebrated Saturday, April 29, at 9 a.m., in St. Michael’s Church, 21 Manning St., Hudson. Relatives and friends are invited to attend. Burial will be private and held at the convenience of the family.