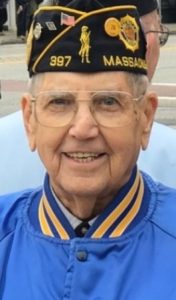 Shrewsbury – Walter J. “Walt” Kalczynski, 88, a longtime resident of Shrewsbury, died peacefully Saturday, Aug. 12, 2017 in Rose Monahan Hospice Home in Worcester after a period of falling health. His wife of 63 years, Marie (L’Esperance) Kalczynski, passed away June 3, 2016.
Walter, son of the late Joseph V. and Mary (Bernat) Kalczynski, was born Jan. 16, 1929 in Three Rivers, Mass. Walter proudly served his country with the United States Air Force during the end of WWII and the Korean War.

In 1952, Walter J. “Walt” Kalczynski met Marie, and in 1953 they married and began to raise their family with love and devotion for each other and their family. In 1955, Marie and Walter purchased their home in Shrewsbury where they have lived, enjoying many holidays, special occasions and family celebrations over the last 63 years.

Walter was a member of the VICTOR R. QUARANTA Post 397 American Legion and an active member of the Shrewsbury Soldiers Memorial Commission.

Walter had worked for the Coca Cola Bottling Company for 44 years before he retired. After his retirement, Walter enjoyed working as a school bus driver for former Laid Law School Bus Company. He enjoyed traveling to many parts of the world especially England, Japan and China where he walked the Great Wall. He and Marie also drove across the United States visiting our landmarks. Walter and Marie also truly believed that faith, family and friends were the most important things in life. He was very generous with his love, time and resources to his grandchildren whom he adored so dearly.

Walter’s funeral will be Thursday, Aug. 17 from the MERCADANTE FUNERAL HOME & CHAPEL, 370 Plantation St., Worcster,  with a procession to the Church of Saint Anne, 130 Boston Tpke., Shrewsbury, where his funeral Mass will be held at 11 a.m. Walter will be laid to rest alongside his beloved wife in Mountain View Cemetery. A period of calling hours will be held from 9-10:30 a.m. in the funeral home prior to leaving for church.

Those who wish to remember Walter by way of a memorial tribute are kindly asked to consider Saint Anne’s Human Services, 130 Boston Tpke., Shrewsbury, MA 01545.