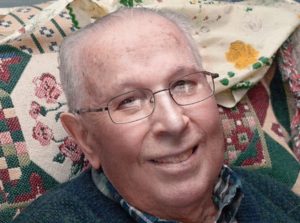 Marlborough – Robert O. Dupuis, 91, of Marlborough, died Sunday, Dec. 3. 2017 at Miriam Boyd Parlin Hospice Residence in Wayland. He was the husband of Madeline A. (Hinckley) Dupuis for the past 55 years.

Bob was born, raised and educated in Marlborough, the son of the late Oscar D. and Flora (Pelletier) Dupuis. He was a 1944 graduate of Assumption Prep School in Worcester and later graduated from Assumption College where he received a BA in French and Philosophy and a MA in French Literature. Bob also was a graduate of Leland Powers School of Radio, Television and Drama. He was a United States Army veteran of World War II having served in the Asiatic Pacific Theater.

Bob was a teacher at Algonquin Regional High School in Northborough for 22 years retiring in 1988. Prior to that, he spent 18 years as a radio broadcaster and program manager, working at several stations in New England, including WPLM in Plymouth, WTAG in Worcester and WSRO in Marlborough.

Bob served on the Boards at Immaculate Conception School and Hudson Catholic. He was a member of Immaculate Conception Church where he was past president of its parish council, Liturgical Chairman, member of the choir, cantor, religion teacher, reader and liturgical minister, a 4th degree member of the Knights of Columbus Assembly # 400 in Natick. He was a professional pianist and vocalist in restaurants and lounges.

Always willing to share his talents, Bob volunteered for 15 years as a news reader for the Worcester-based Audio Journal radio station for the visually impaired, and for as many years headlined a trio at the Evening of Giving annual fundraiser for local shelters. He was a devoted grandfather and he loved visiting Disney World with his family.

Besides his wife, Madeline, he leaves his son, Christopher R. Dupuis and his wife Elaine of Littleton; two daughters, Lisa B. Lapinski and her husband Ron of Acton and Andrea M. Richards and her husband Michael of Nashua, N.H.; seven grandchildren, Brian and Nadia Dupuis, Olivia, Paul and Cecilia Lapinski, Nicholas and Dominic Richards; two brothers-in-law, Louis Hinckley of Florida and Paul Hinckley and his wife Marcia of Connecticut; and two sisters-in-law, Elaine Hinckley of Massachusetts and Shirley Bedard of Maine.

All are invited to sign Bob’s online guestbook at www.CollinsFuneral.com.