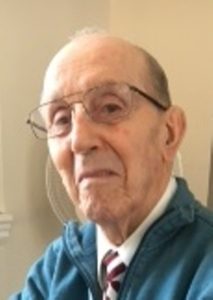 He leaves his loving daughter, Mary Consiglio of Shrewsbury, and a son, John Consiglio; his devoted sister, Dorothy Consiglio of North Andover; and many cousins, nieces, and nephews. He is predeceased by his siblings, John, Mauro, Salavtore, Lucy, Frances, and Antoinette.

Born in Worcester, he was the son of the late Mauro and Lucrezia (Mascolo) Consiglio. He was raised on Shrewsbury Street in Worcester and graduated from North High School. He attended the School of Barbering in Boston.

Frank was a self-employed barber in Northborough for many years, retiring in the mid-1980s.

Frank lived in Northborough for many years before moving to Newton, and later to Hopkinton. He served on the Northborough Board of Selectmen for nine years during the 1970s -1980s, and was a member of the Vincent Picard American Legion Post.

He loved ballroom dancing and woodworking. He was the king of duct tape.

Frank will be remembered for his love of politics. He proudly served in the U.S. Army during the Korean War. Frank was a former member of St. Bernadette Parish in Northborough.

His funeral Mass was held Jan. 17 in St. Bernadette Parish of Northborough, followed by burial with military honors in Howard Street Cemetery. Hays Funeral Home of Northborough assisted with arrangements.